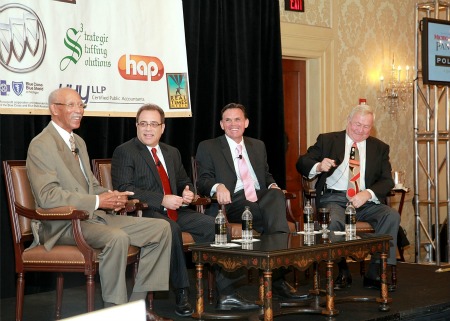 On Thursday, May 16, for the first time since Detroit Mayor Dave Bing announced a potential bid for the office of Wayne County executive, he and the sitting County Executive Robert Ficano will share a stage at Forum III of the Michigan Chronicle’s Pancakes and Politics.  The event will take place on Thursday, May 16, 7:30 am at the Townsend Hotel in downtown Birmingham, Michigan.  Yesterday, Bing announced that he would not seek re-election for mayor.

Bing continued the announcement, shocking the audience with news that he was putting together a committee to explor his options, including running for Wayne County executive, the position held by the embattled Ficano.

Does Bing consider Ficano to be an easy target?  Ficano has been under fire ever since he acknowledged having paid $200,000 severance to former Chief Development Officer Turkia Mullin when she quit her county job to become CEO of Metro Airport.

Bing’s announcement made history.  It was the first time in recent memory that a sitting mayor announced that he would seek higher political office. That is if someone construes the county executive position as being higher than that of the mayor of the city of Detroit.  After all, as one of the Big Four, the city of Detroit mayor’s office is treated as though it is on the same level as the county executive’s, unlike any other mayor in the metropolitan area.

During his announcement Bing cited a litany of accomplishments that were successfully tackled during his administration.  Among them was the demolition of vacant buildings, opening of recreation centers, a new crime facility, guns off the streets, major arrests and drug busts and new and repaired street lights.  He vowed to continue serving the citizens of Detroit.

“I want to continue to work for the advancmeent of the city and this region,” Bing said.  Responding to Bing’s announcement, Ficano said in a statement, “Mayor Bing has worked as hard as anyone to help stablize the city during some very tough times. The filing deadline is still a year out and that’s a lot of time before real decisions need to be made.  Personally my focus is on the business of running Wayne County government and that’s where it needs to be between now and next May.”  Parsed like a true politician.

Now in its eighth season, The Michigan Chronicle’s Pancakes and Politics Speaker’s Forum is the premier gathering for discussing the business and economic issues affecting the metro Detroit region.  The series brings together leading newsmakers in the business and government sectors to address topics most relevant to those invested in the state’s success.  For more information, or to attend this week’s Pancakes and Politics, call The Michigan Chronicle at 313-963-5522.