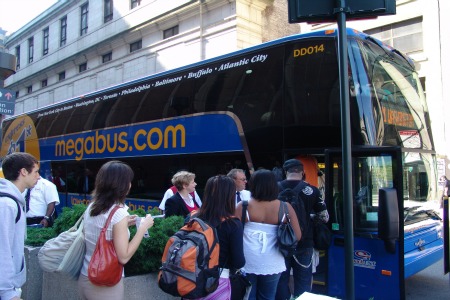 Megabus.com, the first city-to-city, express bus company with fares from $1, has served 25 million passengers across North America as of today.

With fares starting as low as $1, megabus.com has expanded rapidly over the course of its seven-year existence, from serving seven cities to/from Chicago in April 2006 to now serving more than 100 cities across North America.

“Megabus.com’s is now the travel option of choice for more than 25 million people, and we’re thrilled to serve them as our passengers,” said Mike Alvich, megabus.com’s vice president of marketing and public relations. “Our customers continue to look for ways to stretch their hard-earned dollar, and we look forward to providing them with a safe, convenient and affordable travel option.”

Megabus.com is widely known for making bus travel “a cool thing,” said by Joseph P. Schwieterman, Professor, School of Public Service and Director of Chaddick Institute for Metropolitan Development at DePaul University, while announcing “2012 Year-in-Review of Intercity Bus Service in the United States” study results on January 6 in Charlotte, NC.

Visit www.megabus.com for additional information about the service, schedules, arrival and departure times and fares.

Megabus.com is one of the largest privately funded providers of city-to-city express bus transportation and serves approximately 100 cities in North America, including routes operated by other Coach USA subsidiaries.

Service for megabus.com operates daily. Fares shown are one-way and include all government taxes. Each year megabus.com carries six million customers safely on more than 200,000 trips using the most modern fleet of double-decker buses on this continent. Since its launch on April 10, 2006, megabus.com has served more than 25 million travelers. For the latest news and travel deals, follow megabus.com on Twitter at @megabus and Like us on Facebook at http://www.facebook.com/megabus.com.officialpage.

Megabus.com is a subsidiary of Coach USA, one of the largest transportation companies in North America, and maintains the highest safety compliance rating (Satisfactory) from the US Department of Transportation’s Federal Motor Carrier Safety Administration. Paramus, N.J.-based Coach USA owns and operates 30 local companies in North America, some that have been in business for more than 70 years, which operate scheduled bus routes, motor coach tours, charters and sightseeing tours.