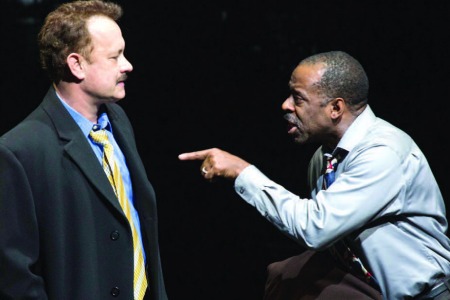 Courtney B. Vance — the B stands for Bernard — has come a very long way since his days as a student at Detroit Country Day School, a highly regarded university preparatory school.

Today he ranks among the most accomplished and respected actors — Black, White or otherwise — in Hollywood, with a list of movie, television and stage credits that is, to say the least, impressive.

Right now Vance is appearing on Broadway in a Nora Ephron play titled “Lucky Guy” starring Tom Hanks, two-time Academy Award winner (Best Actor). In it Vance portrays newspaperman Hap Hairston, an aggressive editor during what has been described as “the tabloid wars” of 1985-1998. That is, when the New York Post, the New York Daily News and New York Newsday were in intense competition.

Hairston is the editor of Mike Mc­Alary (Hanks) who skyrocketed from columnist to Pulitzer Prize journalist.

“I did the reading for it a year and a half ago and really didn’t know what would happen,” said Vance during a recent Broadway World interview.

He got the part, but there was a stipulation.

“THEY WANTED me to gain 20 pounds,” recalled Vance, noting that it was a challenge, but worth it considering the magnitude of the play, which has been extended through July 3 at the Broadhurst Theatre.

Audience response is not always the same from performance to performance.

“My job is to tell the story,” Vance said. “No one can predict how an audience will respond. Our job is to let the story wash over them. The audiences respond in their own way.”

He received a Tony Award nominations for his work in the stage productions “Fences” and “Six Degrees of Separation.”

COURTNEY B. VANCE, born March 12, 1960 in Detroit, in addition to being a gifted actor who is always working, is also one of the most educated people in Hollywood.

He graduated from Harvard University with a bachelor of arts degree. While at Harvard he honed his acting skills as part of the Boston Shakespeare Company. He later earned a fine arts degree at Yale School of Drama.

It was there that he met the woman who would one day become his wife — the immensely talented, Academy Award-nominated actress Angela Bassett.

Interestingly, the two had the opportunity to work together on the popular series “ER,” on which Bassett was a regular. They had often talked about working together in the event that the right vehicle came along.

But even so, Vance was slightly hesitant. Bassett believes that this was due to him feeling that, in a way, this was her territory and that he would be, in a sense, invading her turf. Bassett said nothing could have been further from the truth.

MARRIED SINCE 1997, Courtney B. Vance and Angela Bassett co-wrote a well-received autobiographical book titled “Friends: A Love Story” in early 2009. They agree that a huge part of why their marriage is solid is that they were friends first and remain so.

Vance, who has described Bassett as “the sweetest woman I’ve ever met,” said, “I’m looking at this woman — the woman I’d been looking for my whole life — and I’m realizing it’s my friend who I’ve known for a long time, and it was absolutely overwhelming.”

The list of films Courtney B. Vance has appeared in is a lengthy one and includes “The Hunt For Red October,” “The Piano Lesson,” “Joyful Noise,” “Panther,” “The Tuskegee Airmen,” “12 Angry Men,” “Hamburger Hill,” “The Adventures of Huck Finn,” “Dangerous Minds” and “The Divide.”

Some people are surprised that Vance can be so intense on the screen and on stage when in real life he is mild-mannered, almost soft-spoken at times.

It is not far-fetched to say that the best is likely still to come from Courtney B. Vance.