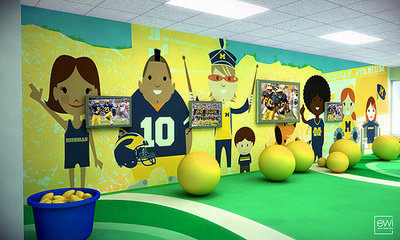 Four out of five parents and grandparents in Michigan say they’d rather take children to a hospital that does medical research for children than one that does not, according to a new poll from the University of Michigan.

A new study from the Michigan Child Health Research Priorities team at C.S. Mott Children’s Hospital found that more than 80 percent of parents and grandparents prefer a hospital that does medical research about children —  if they can expect the same level of care, the hospital is equally accessible and with no difference in cost.

“This project is the first of its kind to ask parents and grandparents about medical research for children, how they want to be involved, and what that means for where they would take their children for medical care,” says Matthew M. Davis, M.D., M.A.P.P., the director of the Michigan Child Health Research Priorities or M-CHRP team.  “We found that the public recognizes the importance of pediatric research and the benefits of healthcare providers who are engaged in that research. They want their children to be cared for by people who are actively involved in developing new ways to prevent and treat illnesses for children.

“Based on this study, we think there is great potential for participation in child health research in Michigan,” says Davis.

M-CHRP is a statewide research effort designed to inform and stimulate public engagement in Michigan around child health research. This poll’s representative sample of 758 adults was made up of Michigan residents who were parents or grandparents of children aged 0 to 17.

In the poll, respondents were given the opportunity to also indicate what types of diseases they think should get the most attention from researchers.  The top 10 areas rated as “very important”:

7.  Transplants for cancer and other diseases: 71 percent

“Through M-CHRP, the people of Michigan can express what kind of research they think is important for children. We hope this data can help U-M better reach families who want to contribute to child health research today and in the future,” Davis says.

At C.S. Mott Children’s Hospital, pediatric research is a top priority. The University of Michigan Medical School was ranked in 2013 as one of the top 10 research medical schools nationwide by U.S. News & World Report. About $320 million in National Institutes of Health funding was awarded to U-M faculty in fiscal year 2011.

“We need to make it a priority to get the word out about research opportunities for children,” says Davis. “Medical research often needs healthy volunteers as well as those who may have the particular disease being studied. While many people may think of medical research as testing new medicines, children’s medical research also includes other types of health studies related to topics such as behavior, nutrition, and mental health.”