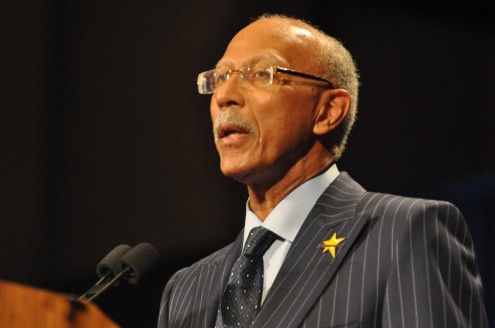 Amidst speculations that there is a movement underway to draft Detroit Mayor Dave Bing to enter an already crowded field for mayor, Bing himself will tell Detroiters Tuesday afternoon what he plans to do.

Mayor Bing will appear at the Charles Wright Museum of African American History at noon to announce whether he will officially become a mayoral candidate and join former Detroit Medical Center CEO Mike Duggan, Wayne County Sheriff Benny Napoleon and others in seeking the city’s top post.

John Roach, spokesman for Duggan’s campaign said Monday night that whether Bing enters the race or not won’t affect the speed of their campaign.

“Mike Duggan knows what his platform is and he knows what his approach with voters has been,” Roach said. “He has been meeting voters face to face and whoever enters the race doesn’t affect how he approaches anything going forward.”

“If he does he cannot win. He hasn’t built a voter based beyond his last election that’s sustainable to allow him to be in the top two for the primary,” Foster said. “Additionally the optics of the failure of the city that happened under his watch like the appointment of an emergency manager, the consent agreement and the growing abandonment of neighborhoods is not a strong narrative to launch a campaign.”

However Foster said one advantage a Bing candidacy might create is that it will force the media to spotlight all of the remaining candidates and not just the perceived two front-runners Duggan and Napoleon.

Eddie McDonald, campaign manager for Napoleon said their campaign is driven to get votes and not about who gets in the race.

“We are staying focus and going after many voters as possible,” McDonald said.