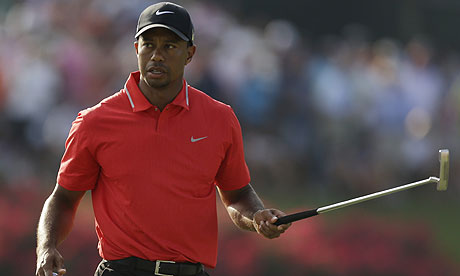 Tiger Woods won the 40th edition of the Players Championship on Sunday, marking his 4th title of the year and the 78th title of his career.  Woods is the 6th player to win more than once, joining Hal Sutton, Fred Couples, Steve Elkington, Davis Love III and Jack Nicklaus.  On the 7th hole at TPC Sawgrass, Woods was tied with Segio Garcia with two holes to play.  The duo beefed all weekend. It started when Garcia complained that one of his shots was off because Woods pulled his club out of the bag causing the crowd to cheer. According to Woods, he didn’t realize that Garcia had not taken the shot.  Garcia said he should have been paying attention… and the beef was on with Woods retorting, “It’s not real surprising that he’s complaining about something.”  Garcia even said that “Woods is not the nicest guy on the tour.  It’s sounds like I was the bad guy here.  I was the victim.”  Woods had the last word… he won the trophy.  Woods won the Players Championship in 2001.