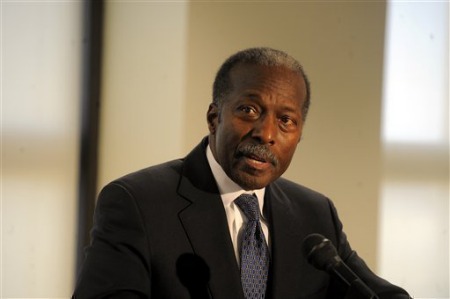 Roy Roberts, Detroit’s emergency manager who battled with the Detroit Board of Education over academic control in court, announced his retirement today at Pasteur Elementary School. He is leaving at the completion of his second year contract which expires May 16.

Roberts, a former General Motors executive, was named to the post by Gov. Rick Snyder and praised as someone who would bring focus to the troubled school district.

“I’ve had many amazing opportunities throughout my professional life, and my wife, Maureen, has been there along with me the entire way. In fact, when Gov. Snyder approached me about taking this position we agreed together that we had to do this,” Roberts said at a news conference. “It’s now time for me to really listen to what it is that will make her happy and that is the two of us along with our family spending more time together. Every time I tell her that I’m going to retire — and I’ve done it two or three times now — she believes me. This time I meant it.” Roberts said he is confident in the leadership team he’s leaving at DPS.

“Their continued presence is important because it brings the district the stability that is critical to its future success,” Roberts said. “Together along with 600 teachers, administrators, students, parents, clergy, community members and business and community partners, this team developed a fiveyear strategic plan designed to create neighborhood centered, quality schools.”

Roberts said some of those plans include ensuring that every four year-old child in Detroit is introduced to early childhood education by the school district, creating a day care in the schools and getting neighborhoods to claim ownership of schools. Roberts’ replacement will announced by Snyder soon.

Bankole Thompson is senior editor of the Michigan Chronicle. He is the author of book series on the Obama presidency. His book “Obama and Black Loyalty,” published in 2010, follows his recent book “Obama and Christian Loyalty” with an epilogue by Robert S. Weiner, former White House spokesman. Thompson is also a political news analyst at WDET-101.9FM Detroit (NPR affiliate) and a member of the weekly “Obama Watch” Sunday evening roundtable on WLIB-1190AM New York and simulcast in New Jersey and Connecticut.