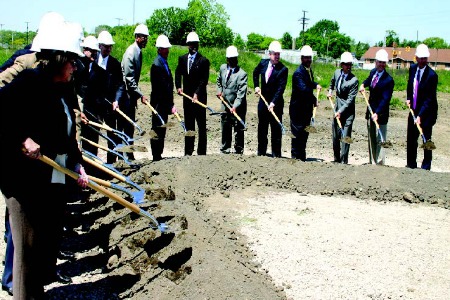 Detroit Economic Growth Corporation (DEGC) President George Jackson said that if he were talking to someone from out of town about Detroit’s economic development, he’d do so from the standpoint of Detroit being a good business climate and a great place to locate their company.

“I guarantee that we would be a pleasant surprise to any perceptions you may have had beforehand once you come here,” Jackson said. “I say that because on so many occasions when people finally come to the city it by far surpasses their expectations.”

He attributes that to Detroit’s many recent success stories.

“And even over the years, actually,” he added.

Jackson also noted that this exceeding of expectations isn’t just from a business climate sense, but in general.

“It’s definitely a good place to do business,” he said. “But also the quality of life is much better, more robust than in some cases people anticipate it to be.

Asked what he would consider the most exciting activity going on in Detroit right now, Jackson said it’s the fact that in certain areas of the city, there seems to be a resurgence in the residential market.

“The fact is that we have more people moving into the city in various areas, downtown, Midtown, riverfront, but also in some of the neighborhoods,” Jackson said. “We’re getting a lot more young, college-educated professionals. And also baby boomers who want an urban living experience. So the pent-up demand for urban living has finally hit the city of Detroit, as it has in other cities across the nation.”

When Jackson spoke to the Chronicle in 2011, he said things were progressing well in terms of bringing in “big box” stores. He still believes that is the case.

“We have two big box stores,” he said. “One is under construction and the other is about to be built. Those are the Meijer at Eight Mile and Woodward and we have a Meijer in northwest Detroit on the former site of Redford High School. I would say that’s progress. Both of those stores will employ hundreds of people and also bring much needed shopping options that are now national and regional to Detroiters, without them having to drive to a suburb to enjoy that level of retail.”

Jackson added that Detroit also has Whole Foods, which he said many people had stated would never come to the city.

Since 2002, when he started at his job, the two things he’s heard people say they wanted the most have been more national retail options; and that Whole Foods was at the top of most people’s lists.

During the 2011 interview Jackson also said that when he’d visit Whole Foods stores in other cities in the metro area, most customers were from Detroit.

“Detroiters are spending hundreds of millions of dollars outside the city of Detroit for groceries,” he said.

“That’s not a put-down of the stores that we have here, but it just shows that there is a demand for national retailers by city residents.”

He added that the national retailers could definitely complement the independent retailers.

The DEGC is involved in various “development districts.”

Jackson said if he were speaking to an out-of-towner about Detroit, he’d emphasize whichever district would relate most to what that person might be looking for.

“We can accommodate all,” he said. “As I said before, whether it’s retail, whether it’s commercial, whether it’s industrial, whether it’s downtown or they want to be in a neighborhood. We have all those options available, and I think that we also have some very good demographic information to back up where we would end up taking them.”

The development districts in which DEGC is involved include Capitol Park, which involves the redevelopment of the Capitol Park Building, the former United Way Headquarters and the Farwell Building, all located on Griswold. The expected investment is $41 million, and the DEGC’s 2012 progress report describes the district as a prime location for residences, offices and retail stores.

The Gateway Marketplace, at the southeast corner of Eight Mile Road and Woodward, will not only feature the 197,000 square foot Meijer as its anchor tenant, but will also generate an expected $10.75 million in taxes from the property’s increased value.

As head of the DEGC, Jackson has a lot on his plate, but one thing that doesn’t concern him is the presence of the emergency financial manager.

“We mainly work with business people and the business climate is good,” he said.

“And they feel that the political climate and the governmental process will eventually be resolved.”

He added that he’s not seen a slowdown from a business standpoint.

“Business is good, it’s really on an upswing,” he pointed out.

According to Jackson, one misconception people have about the DEGC is that it only does “the big stuff.” He wants people to know that most DEGC loans go to small businesses.

“By far,” he said. “And we call on 250 to 300 existing Detroit businesses every year. Not them calling us first. We go after them, and most of those, by far, are small businesses.”

Jackson emphasized that, in totality, small businesses are going to create more jobs than large ones.

“We want to make sure we grow the small business community but also retain them in the city of Detroit,” he said.

“So we make what we call these retention calls on between 250 to 300 businesses per year in the city of Detroit.”

Jackson said the one overall thing he wants people to understand abut the DEGC and its role is that it’s not a political organization.

“We’re a business organization that makes business decisions to grow the economy of the city of Detroit,” he said.

Other developments in Detroit include those headed up by Midtown Detroit, Inc., which is led by Susan Mosey.

Midtown developments include the Midtown Greenway, currently under construction.

This non-motorized pedestrian and bike trail will be part of a 10 mile greenway connecting the New Center to downtown.

According to the Midtown Detroit website, the greenway will, among other things, reclaim right-of-way for pedestrians, create an environment to help build a strong sense of community and help the community reintroduce needed green space.

Other Midtown Detroit projects have included new commercial tenants on the Wayne State campus and the renovation of a historic home at 295 E. Ferry into nine one-bedroom rental units.

Other developments are being heralded by Dan Gilbert, whose Bedrock Real Estate Services is working on developing the Central Business District. These include the Z Site on Library Street, with 33,000 square feet of street-level retail and office space, and The Shops at Woodward Center, located between Grand Circus and Capitol parks, and more than a dozen more.

In all, Gilbert has invested nearly $1 billion in the purchase of approximately three million square feet of real estate.

Gilbert, Jackson and Mosey will all be speaking at the Pancakes & Politics forum at the DAC April 25.