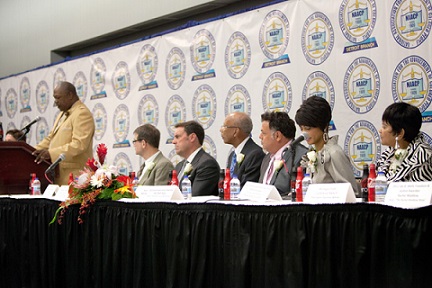 Since its inception, the NAACP’s Annual Fight for Freedom Fund Dinner in Detroit has been known as the largest sit-down dinner in the world. The illustrious list of notable keynote speakers have ranged from such notable officials, including President Barack Obama, President Bill Clinton, Vice President Al Gore, Secretary of State Hillary Clinton and U.S. Attorney General Eric Holder. On Sunday, April 29 the democratic leader of the U.S. House of Representatives Nancy Pelosi, stood at the podium and delivered the historic organization’s keynote address at the 2013 Fight for Fight for  Freedom Fund Dinner.

Pelosi a 26-yaar veteran of the U.S. Congress  spoke solemnly about the challenges the nation faces.

“We didn’t invite Nancy Pelosi because she is a democrat,” said the Rev. Wendell Anthony, president of the NAACP Detroit branch, the largest and most active branch in the nation. “We invited her because when we call on her [for assistance] she will push open the gates, and if she can’t push them open, she will climb over the gate, and if that doesn’t work she will parachute in.”

Pelosi a 26-yaar veteran of the U.S. Congress spoke solemnly about the challenges the nation faces.

Following a nod and acknowledgement to Alabama congresswoman Terri Sewell, the first black woman to be elected to congress from that state, for introducing a house bill  to honor the “Four Little Girls” killed in an Alabama church bombing in 1963.

Pelosi went on to inspire the 10,000 plus Fight for Freedom Fund Dinner audience members with one of her favorite Dr. King quotes, “Freedom must never be defaulted, it must forever be exalted!”

The popular politician, a 26-year veteran of congress, then outlined her plan for making change in America.  “To achieve economic sustainability, we have to build confidence.  … We have to do this to enable everyone in America to achieve prosperity. We  must address disparities in quality and in income,” said Pelosi.

Congresswoman Pelosi may best be known for spearheading passage of the historic health insurance reform legislation in the House of Representatives, which established a Patient’s Bill of Rights and will provide insurance for more Americans while lowering health care costs over the long term.

Pelosi also encouraged all Americans to recognize the dignity and worth of every human being, emphasizing the importance of creating a society at peace with itself.

Against the backdrop of the most successful NAACP Fight for Freedom Fund dinner in history a small group of BANCO protestors marched in outside of Cobo Hall calling for the resignation of all Detroit Branch board members. –roz edward