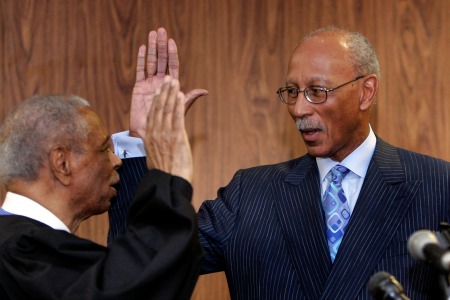 In an unprecedented move, Detroit Mayor Dave Bing pulled petitions for a mayoral campaign as the May 14 deadline approaches without filling in the petition box that stipulates a run a for reelection this afternoon at the second floor of the Coleman A. Young Building in the City Clerk’s Office.

If Bing decides to run for another term, his inclusion will shake up the race and make the field of candidates, including former Detroit Medical Center CEO Mike Duggan and Wayne County Sheriff Benny Napoleon, more competitive.

Bing has been mum about his reelection prospects for a while, until this afternoon when his office issued a brief statement indicating press availability at the clerk’s office.

“I have not obtained signatures. I’ve been in contact with citizens. The window is obviously open. I’ve said for several months that I’ve not made my mind yet. That is still true. The first step of the process is picking up signatures,” Bing told a gathering of journalists.

Bing will need 500 signatures submitted to City Clerk Janice Winfrey’s Office by May 14, the cutoff date to submit signatures for a mayoral run.

“When I make the decision to win then I’m in it to win it. This is a huge decision for anybody who is going to run,” Bing said. “If I’m going to go another four years I’ve got to make sure I touch base with all the people.”

If he jumps in the race as the incumbent, Bing said he will declare that he’s running to continue to fix Detroit noting, “We’ve made some positive things happen.”

In an era of an Emergency Financial Manager (EFM) overseeing Detroit, some critics have dismissed the mayor’s race as having less significance because the EFM, Kevin Orr, potentially could be in charge of the city beyond the stipulated18 months he’s required to stay.

Bing will hold another media availability in the coming days during which he will declare whether or not he is officially in the race for mayor.

Bankole Thompson is the editor of the Michigan Chronicle. He is the author of a book series on the Obama presidency. His book “Obama and Black Loyalty,” published in 2010, follows his recent book, “Obama and Christian Loyalty,” with an epilogue by Robert S. Weiner, former White House spokesman. Thompson is also a political news analyst at WDET-101.9FM Detroit (NPR Affiliate) and a member of the weekly “Obama Watch” Sunday evening roundtable on WLIB-1190AM New York and simulcast in New Jersey and Connecticut