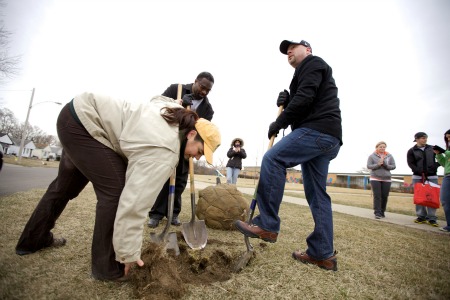 April 6, hundreds of volunteers put on t-shirts and jeans, grabbed shovels and planted nearly three hundred trees in Detroit’s northwest neighborhoods. The Greening of Detroit initiative, with the help of thousands of volunteers, corporate and community support has a planting goal of almost two thousand, five hundred trees through the spring season in targeted communities around the city. Most of the trees that will be planted by The Greening this spring are part of the green infrastructure efforts undertaken by the Detroit Water and Sewage Department to reduce storm water runoff in the Cody Rouge neighborhood. By planting big trees, the organization and the city are hoping to solve the overflow problem, essentially cleaning up the water system in a cheap, effective way while simultaneously helping to beautify the neighborhood. Metro Detroit and other parts of the country became infested with an invasive inspect species called the Emerald Ash Borer, which is responsible for the loss of tens of millions ash trees in the Detroit area alone.

“The Greening of Detroit is working with the city to address the community’s forestry needs,” said Dean Hay, director of Green Infrastructure at The Greening of Detroit. “Our city’s financial constraints have severely reduced forestry services at a time when the city has an even greater need to plant trees and develop healthy, green spaces. Our work is more important than ever, especially since the devastation of the ash tree in metro Detroit.”

Having more trees in our neighborhoods will provide numerous benefits to the environment and the social and economic landscape, including:
• help clean the air
• provide shade and cooling in the summer, reducing heating and cooling expenses
• reduce carbon emissions
• help fight climate change
• Reduce crime and stabilize neighborhoods
• Increase real estate values
• Provide aesthetic beauty and calmness to the landscape

The Greening initiative aligns with the Detroit Future City strategic framework and the new green infrastructure is projected to save the city huge amounts of money because the trees will absorb moisture and reduce contamination of pollution and raw sewage into the clean water system.

“The Greening’s tree planting is a great example of Detroit Future City’s ecological focus, which is required to improve [the] quality of life in Detroit. I commend The Greening for creating green infrastructure that makes Detroit more sustainable and attractive,” said Heidi Alcock, CEO of Michigan Community Resources, one of the lead civic engagement partners for the creation of the Detroit Future City framework.

In addition to working with the Detroit Future Society, Quicken Loans is the premier corporate sponsor of The Greening’s Green Thumb Volunteer Challenge.

“Our company is heavily investing in downtown Detroit and believes in supporting efforts to stabilize neighborhoods and improve the city’s overall economic and environmental landscape,” said Tim Birkmeier, vice-president of Mortgage Banking for Quicken Loans. “We encourage our team members to engage in the community where we live, work, and play. Our team members want to make a difference in everything they do and take pride in being part of the Greening of Detroit’s efforts!”

The Greening of Detroit will be planting trees every Saturday (with the exception of Memorial Day weekend) through mid-June. Anyone interested in volunteering can register online at www.greeningofdetroit.com and clicking on “Get Involved” or contact their office at (313) 237-8733.