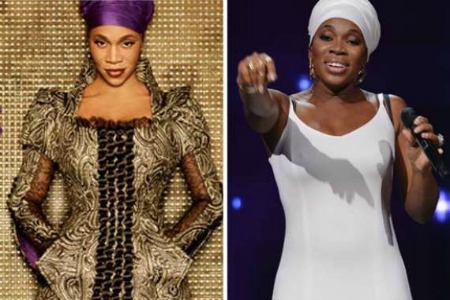 “Brown Skin” singer India Arie says that she did not bleach her skin despite appearing shades lighter on the cover her new single “Cocoa Butter.” The R&B, soul singer has been a strong advocate for black beauty and loving natural skin and hair, however fans were outraged when she appeared visibly lighter on the cover than she had been previously. TMZ reported that rumors spread that she had bleached her skin.

If you recall, Arie was very vocal in her opposition to Zoe Saldana playing the legendary Nina Simone in the upcoming biopic, and was upset by images of Saldana with the darker skin and afro that is clearly not her own.

“Yes there should be a movie made, and YES they should have chosen someone who LOOKS like Nina Simone, ESPECIALLY since her RACE played such a PIVOTAL role in WHO, WHAT and WHY, she was.”

Her strong objections make the cover of “Cocoa Butter” is all the more confusing.

Arie responded today via Twitter, dispelling rumors that she had bleached her skin. Instead she sites lighting and the camera angle for the difference in color.

Love to all #SoulBirdsWorldWide are you ready for this #SongVersation ?
Personally speaking! I’m happy to say I have NOT BLEACHED my skin LOL! ROTF at the thought.
1. I wouldn’t endanger my health that way
2. i’m so in love with myself I have no DESIRE to BLEACH myself. Lol
3. The GLOW you see IS (magnificent) lighting
4. THE LIGHT you see, Well thats all ME!!
Politically speaking racism/colorism in the black community is a MUUUUUUUCH larger #SongVersation #skinversaton
THAT I’d LOVE to “shed light on”..that conversation IS REAL, …let’s keep talking. #SongVersation #soulbirdsworldwide
Big love to ALL #soulbirdsworldwide

Check out the photo above that TMZ pulled together of the “Cocoa Butter” cover art and a performance just last year. What do you think?