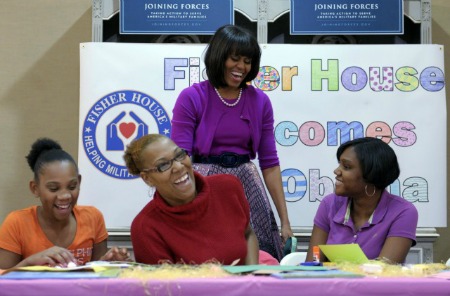 First Lady Michelle Obama (pictured standing) will be returning home next month to join Chicago Mayor and former White House Chief Of Staff Rahm Emanuel for a gathering with community leaders focused on youth empowerment. Given the high rate of violence in the city and the deeply embedded gang culture, Mrs. Obama will be addressing the group with the hopes of developing opportunities for young people.

The meeting, called the “Joint Luncheon Meeting: Working Together to Address Youth Violence in Chicago,” will be held on Wednesday, April 10, and hosted by Mayor Emanuel at the Grand Ballroom of the Hilton Chicago. Invited organizations and groups include the Commercial Club, the Economic Club, the Executives’ Club, and World Business Chicago.

The First Lady will be asking local business leaders to make deeper investments in the community and expand the opportunities across the sprawling city. Although much of Chicago’s downtown and Loop area have seen an upward trend over the years, the city’s west and south areas are severely lacking when it comes to development. These areas are mostly inhabited by African-American and Hispanic residents, with poverty and the rash of violence hitting those groups often.