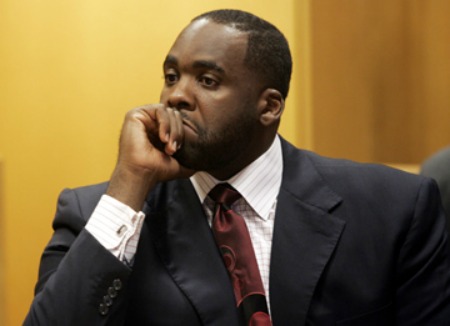 Kwame Kilpatrick is pulling out all the stops to get out of jail, at least temporarily. His latest attempt, however has failed.

The ex-mayor’s request for release on bond until sentencing has been denied by a federal court judge. U.S. District Judge Nancy Edmunds made the decision, citing Kilpatrick’s criminal record and a history of problems adhering to parole conditions.

Kilpatrick asked to be removed from custody so that he can seek medical treatment for a knee injury. His attorney, James Thomas revealed in court documents that he feels his client has not received adequate treatment for his injury while incarcerated at Milan Detention Center. Thomas also reiterated that Kilpatrick has no money, is not a flight risk and poses no threat of danger to society.

In an attempt to appeal to the court’s favor, Kilpatrick’s mother and former U.S. Representative Carolyn Cheeks Kilpatrick offered as collateral her Detroit home to guarantee her son will report to court for sentencing.

Kilpatrick currently awaits sentencing following his Mar. 11 conviction by a federal jury on multiple counts including racketing and conspiracy.