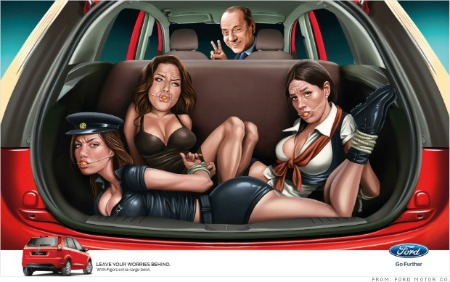 The India-based advertising agency that created artwork depicting women tied up in the back of a Ford has fired some of the employees responsible for the images.

The cartoonish drawings, produced by WPP unit JWT, were never part of a paid campaign. But they have struck a nerve as India institutes new rules to protect women following a series of high-profile gang rapes.

“After a thorough internal review, we have taken appropriate disciplinary action with those involved, which included the exit of employees at JWT,” the company said in a statement. “These were necessary steps owing to the direct accountability of the concerned individuals as we work to ensure that both the right oversight and processes are strictly enforced so that this never happens again.”

Deepa Sridhar, a spokesperson for JWT, declined to say how many employees had been fired. The ads were not published or seen by senior executives at WPP or Ford.

The incident has drawn apologies from all of the involved parties, including Ford.

“We deeply regret this incident and agree with our agency partners that it should have never happened,” the automaker said earlier this week in a prepared statement. “The posters are contrary to the standards of professionalism and decency within Ford and our agency partners.”

WPP also released a statement saying that it “deeply regret[s]” the existence of the “distasteful” posters.
Ford unveiled the Figo, a subcompact, in 2009 to be produced in India and exported to other Asian countries and Africa.