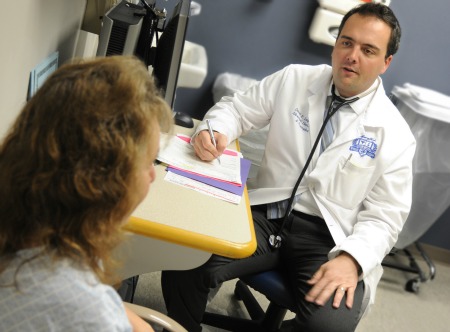 A class of medications commonly prescribed to lower blood sugar in diabetic patients appears to protect them from developing heart failure, according to a study at Henry Ford Hospital in Detroit.

“People with diabetes are at risk for developing heart failure,” says Henry Ford researcher and cardiologist David Lanfear, M.D., lead author of the study. “Diabetic adults die of heart disease two to four times more than those without diabetes.

The results were presented March 10 at the American College of Cardiology’s annual meeting in San Francisco.

There are more than 25 million adults and children in the U.S. with diabetes, according to the American Diabetes Association. The ADA estimates that nearly 80 million people may be pre-diabetic, with nearly two million new cases diagnosed in adults in 2010. In 2007, diabetes contributed to a total of 231,404 deaths.

The retrospective study looked at 4,427 diabetic patients who were taking blood-sugar-lowering medications at Henry Ford Hospital between January 1, 2000 and July 1, 2012. Of these patients, 1,488 were taking GLP-1 medications (glucagon-like peptide-1 analogs and dipeptidyl peptidase-4 inhibitors) and 2,939 were not.

Over an observation time of 663 days, there were 281 hospitalizations, of which 184 were due to heart failure, and 158 deaths.

Results were adjusted for factors such as gender, age, race, coronary disease, heart failure, duration of diabetes, and the number of anti-diabetic medications, in order to identify the effect specifically attributable to taking GLP-1 medications. The researchers also looked at hospitalizations and deaths from all causes.

Use of GLP1 medications was associated with a reduced risk of hospitalization for heart failure or any other reason, as well as fewer deaths.

“These preliminary results look very promising,” says Dr. Lanfear. “However this was a retrospective study and this subject needs further investigation.”

The study was funded by the National Institutes of Health and Henry Ford Health System.