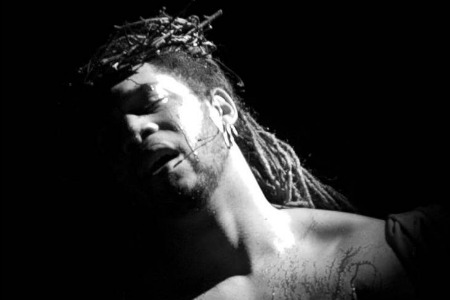 Kenny Watson in the role of Jesus

“The Cross and The Light,” an acclaimed musical dramatization of the passion, death and resurrection of Christ, will debut at the Music Hall Center for the Performing Arts.
This production has been described as the “Broadway version of the ‘Passion of Christ’” because of its original music score, extraordinary stage production, special effects, and high‐caliber actors. “The Cross and The Light” is running for 11 performances from Palm Sunday, March 24, to Easter Sunday, March 31.
“‘The Cross and The Light’ has continually evolved over the years as we have drawn inspiration from personal experiences and thousands of audience members,” said Kelly Nieto, executive producer.
“We’ve developed a production that has received critical acclaim and are thrilled to have grown and revamped the production for its debut at the Music Hall. New audiences will love this and returning fans will have something new to experience.”
Nieto began producing “The Cross and The Light” in 2002, at which time it was named “Living Stations.”
The original music score was written by Nieto and songwriter Nick Dalbis of Crossroads Productions. This production chronicled the passion and death of Christ, and captivated audiences with its powerful musical and theatrical interpretation of the timeless Biblical story.
In 2011, the production moved from Our Lady of Sorrows in Farmington, Mich. to the iconic Cathedral of the Most Blessed Sacrament in Detroit, where it attracted more than 22,000 audience members.
After rave reviews and inspiration, Nieto decided to continue the story beyond the death of Christ and added a second act, which depicts Christ’s Resurrection to the Pentecost. The union of “Living Stations” and the second act became “The Cross and the Light.”
The cast consists of approximately 45 professional and amateur actors, including Kenny Watson, famed Detroit vocalist who is playing Jesus, and Candice Jackson, portraying Mary Magdalene. Annie Klark, music director of “The Cross and The Light,” said, “We completely recast the show this year and we’re blown away by the caliber of talent we were able to attract and place in the roles. The score is incredible and the cast’s voices are enchanting.”
Performance schedule is as following:
March 24 Palm Sunday – 7:30 p.m.
March 26 (student day) – 10 a.m.
March 27 (senior day) – 10 a.m.
March 28 (family day) – 3 p.m.; 8 p.m.
March 29 Good Friday – noon; 8 p.m.
March 30 3 p.m.; 8 p.m.
March 31 Easter Sunday – 3 p.m.; 7:30 p.m.
Tickets for “The Cross and The Light” range from $35 to $100 and are on sale now. For groups of 25 or more tickets, a 20 to 30 percent discount applies when purchased through the group sales department at 734.788.7073.
For more information about the production, show times or to purchase tickets, visit www.crossandlight.com or www.ticketmaster.com