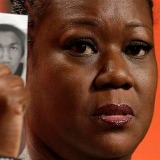 (CNN) — The U.S. Supreme Court hears arguments on Tuesday and Wednesday about the constitutionality of two laws in the same-sex marriage debate. Tuesday’s arguments deal with one of the laws: California’s Proposition 8, which says marriage in that state is between a man and a woman. The high court’s decision, expected later this year, could have a profound impact on the definition of families in America.

Here’s the latest on Tuesday’s arguments on California’s Proposition 8:

Looks like Justice Kennedy will definitely be the one to watch today.

“What am I looking to? Justice Kennedy in his questioning,” said California Lt. Gov. Gavin Newsom who, as San Francisco mayor in 2004, stoked controversy by ordering City Hall to issue marriage licenses to same-sex couples.

He told CNN’s “Starting Point” this morning that Kennedy would be key because he wrote the majority opinion in the 1996 case of Romer V. Evans in Colorado. The case dealt with Amendment 2, a Colorado initiative that banned state government from passing laws prohibiting discrimination against the LGBT community. The Supreme Court struck down the law in a 6-3 vote.

Protesters are braving temperatures in 30s outside the high court this morning to make their stand in the same-sex marriage debate. Rainbow flags are flapping next to American ones as demonstrators bundled in thick coats and scarves hold up banners reading “The nation is ready for Marriage Equality” and “Faith Alliance to preserve the sanctity of marriage as defined by God.”

Today’s oral arguments will focus on Proposition 8, a ballot initiative that was approved by California voters in a 52-48% vote in November 2008. The vote happened less than six months after the state Supreme Court ruled marriage was a fundamental right that must be extended to same-sex couples.

Its approval immediately ended same-sex marriages in the state, but opponents of the measure challenged it in court and have succeeded in convincing federal judges at the district and appellate levels to find the ban unconstitutional.

The Supreme Court will open its doors to the public and the media at 8 a.m. ET, two hours before oral arguments are scheduled to start.

The justice to keep an eye on is Anthony Kennedy, who may be the crucial fifth vote on either side, says CNN’s senior legal analyst Jeffrey Toobin.

“I will be listening to what Justice Anthony Kennedy says,” Toobin said about the oral arguments. The four Democratic appointees — Justices Ginsburg, Breyer, Sotomayor and Kagan — will likely all vote for marriage equality.

“The most likely person to give the fifth vote is Anthony Kennedy,” Toobin said.

Supreme Court justices this morning will launch an epic dialogue when they hear oral arguments in the first of two appeals to state and federal laws restricting same-sex marriage.

The first round today will deal with an appeal of California’s Proposition 8, which defines marriage as between a man and a woman. The second round, scheduled for tomorrow, will tackle the 1996 federal Defense of Marriage Act (DOMA) and a constitutional appeal over same-sex marriage and “equal protection.”

The arguments will start at 10 a.m. ET today, but don’t expect a decision until at least June.