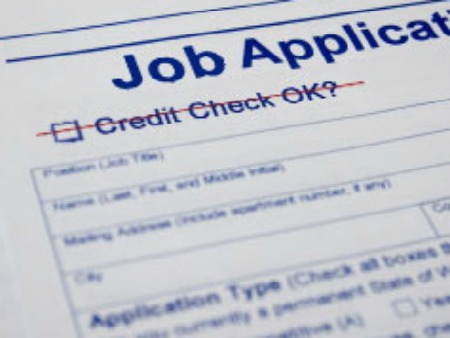 Will your credit report keep you from getting the job you want?

A recent study says that just might be the case.

Public policy organization Demos surveyed over 1,000 low- and middle- income households with debt to find that individuals are losing out on job opportunities because of their credit scores. The study found that nearly 25 percent of the country’s unemployed have been required to undergo a credit check by prospective employers. Of that number, one in ten applicants who get screened are denied based on the results.

The latest trend among employers is one that is keeping the jobless unemployed. It’s a catch-22 whereby finding a job is needed to pay off debts yet such financial troubles can keep you out of work.

Medical bills are for a lot of people the number one reason for debt. Many struggle to pay them off due to unemployment and loss of insurance coverage. Barring individuals from an opportunity that would fix the very problem for which they’re being alienated creates a snowball of dilemma. How can you keep up with bills if you don’t have the money to pay them?

One might be surprised to find that credit checks aren’t reserved for senior level positions. The Demos study found that screenings are being equally used for basic, entry-level jobs and even ones that pay a fairly low hourly rate. Hence, you might find yourself having to hand over a consent to check even if you’re simply applying for a driver or server position.

A person’s credit score typically has very little to do with their ability to perform a job. In most cases, the only thing it reveals is that they’ve fallen behind on their bills. There are countless reasons that could be the cause. Not everyone with debt is intentionally avoiding it. In fact, many people simply do not have the funds to pay what they owe.

Minorities are disproportionately affected by their credit scores when compared to others. African Americans and Latinos, on average, have lower scores than their white counterparts. Higher unemployment rates are largely the cause of that discrepancy.

A few other issues make reliance on credit reports during the hiring process problematic. One stems from the possibility of inaccuracy. An FTC study found that nearly 20 percent of consumers have errors on their report. Another major issue lies in subjectivity. Because employers cannot see the score, and only the information contained on the report, they might make uninformed decisions.

There is an upside to using credit screening, and it benefits employers. It protects them against the possibility of theft, embezzlement and legal repercussions. Employers rely heavily on its results when considering candidates for positions that handle money or high-priced items. In most cases, however the reports do nothing more than eliminate honest candidates simply because of the financial record. It’s not always a trusty gauge for making the right decision when it comes to hiring.

While many claim it’s not a significant factor, more and more employers are screening applicants’ credit during the hiring process. The Demos study found that previous work experience continues to be the most important determinate, yet a handful of employers admit that credit checks play an influential role in their final decision.

Current laws stipulate that employers must ask permission before running a credit check on an applicant. They must also notify an individual whom they deny based on its results, and allow a window of time for them to dispute incorrect information before taking adverse action. Such regulations tend to be difficult to enforce given that employers can refuse an applicant and still cite other reasons as the cause for denial. Further complicating the matter is the fact that state laws give employers permission to reject an applicant based on the results of their credit report, or simply refusing to consent to the process.

Many Americans continue to struggle to find work. Employer credit screening poses a serious threat to the jobless. The unfair elimination of otherwise suitable applicants is one extra hassle people don’t need when it comes to searching for employment. Law makers across the nation are outraged , and eager to stop the trend dead in its tracks. A push by Tennessee Democratic Representative Steve Cohen has been established with the Equal Employment for All Act. This piece of legislation would keep credit screening completely out of the hiring or firing decision.

What’s the solution to eliminate the unfairness of such screening? Demos researchers recommend that medical debt and disputable information be removed from credit reports by the Consumer Financial Protection Bureau. It would be a big step, yet one that would preserve among job seekers a fair chance to prove their candidacy. Demos also suggested that the entire process of disputing errors be made easier. Will law makers take such suggestions into consideration? We can only hope so, as it will curtail a problem bound to get out of control given the constraints of an already limited economy.