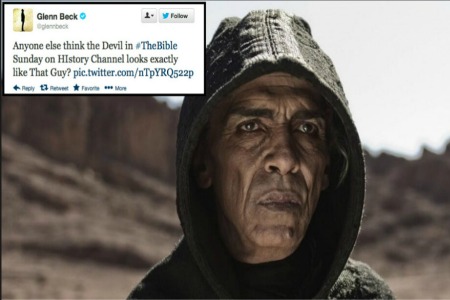 Sunday night, the hugely popular television series “The Bible” debuted with their third installment, which concluded with the Old Testament and began with the New Testament. Apparently, faux-political commentator Glenn Beck (pictured) has been keeping tabs on the show and made a controversial observation regarding the resemblance between President Barack Obama and actor Mohamen Mehdi Ouazanni who plays “Satan” on the show.

On Saturday, a day before “The Bible” aired, Beck tweeted the following message (pictured above):

“Anyone else think the Devil in #TheBible Sunday on History Channel looks exactly like that Guy?”
Beck’s statement electrified the Twittersphere, with others finding Beck’s “observation” humorous:

While others weren’t as amused:

I wonder if Beck would be so forthcoming with his observations if the man in question had any resemblance to former President George W. Bush?

While it almost doesn’t make sense to belabor the point, it isn’t lost on me that Beck reveling in the idea that the President supposedly — and conveniently — looks like the devil clearly goes beyond facial features and is meant to extend to the President’s moral base and character.

And while I reject almost everything failed Republican presidential candidate Mitt Romney stands for and represents, I — and I’m sure most people — would never suggest that Romney’s politics could be equated with Satan — even if many of the elitist principles he represents and represented, i.e., attacking the “47 percent,” were against the poor and working man.

But then again, given the vitrolic response to President Obama since before his first term, I guess this type of shameless double entendre is par for the course.