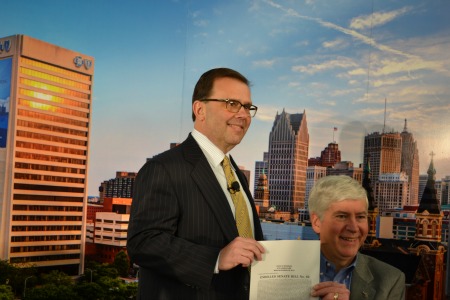 More policy options, better pricing —that’s what Michigan consumers can expect to see following the signing of Senate Bills 61 and 62 which enable Blue Cross Blue Shield of Michigan (BCBSM) to transition to the status of a nonprofit mutual insurer.

The bill enactment changes the way BCBSM is now regulated and moves Blue Cross under consistent guidelines with other insurers, while sustaining its nonprofit social mission through contributions of $1.56 Billion from BCBSM over 18 years to a new nonprofit foundation established by the law.

“This is a big day for Michigan because Blue Cross is a critically important company to Michigan residents,” Snyder stated, noting that Blue Cross has been operating as the “insurer of last resort” under Public Act 350 since 1980.

The move is expected to retain the strengths of Detroit’s leading employer, while removing market barriers that prohibited the insurer from competing on a level playing field, according to Daniel. J. Loepp, president and CEO of BCBSM.

“We at Blue Cross take our nearly 75-year heritage very seriously,” Loepp said. “Changes in how we are regulated will not change our company’s character or commitment to Michigan. Our customers can rest assured that the coverage they have today will remain in place during this transition.”

The signing of these bills will protect seniors on Medigap for years and years to come, according to

“And, the change insures that the state’s largest insurer will continue to grow and pay more taxes in the City of Detroit,” noted Sen. Virgil Smith, Jr. (D), who joined a bipartisan group of legislators applauding the effort.

BCBSM, which will pay an estimated $100 million in annual state and local taxes, did not ask for any new business incentives, tax abatements or other special treatment in their efforts to move toward a more even competitive field, according to Smith.

Higher rates are not anticipated to result as a result of the bills enactment. The company expects to reduce its rate proposal approval process from a cumbersome 9 to 18 month process down to a 30 day process, according to Loepp.

“We expect to be more nimble and competitive moving forward,” stated Loepp. “This is a price sensitive market and we intend to compete in it.”

BCBSM expects to receive board approval on transition process steps in the summer months which include forming a new nonprofit mutual insurance company by filing articles of incorporation, submitting a plan of merger for regulatory approval and merging BCBSM into the new nonprofit mutual structure for an effective date of Jan. 1, 2014.

“Changes required to become a mutual insurance company will be small in scope compared to the changes we have been and will be implementing to conform to the federal health reform law,” Loepp said. “Federal health reform is impacting every aspect of our industry and will continue to be the driving force behind changes our customers and stakeholders will experience throughout 2013 and 2014. Blue Cross will be ready to lead this change, thanks in no small measure to the vision of Gov. Snyder for modernizing our regulatory system here in Michigan. We salute the governor for this landmark legislative achievement and applaud the Michigan House and Senate for working diligently to complete work early this year.”

Michigan Attorney General Bill Schuette is critical of the legislation, which he says is “insufficient to help seniors pay for Medigap, or Medicare supplemental policies, after 2016.

Editor’s Note: Jackie Berg is the CMO of the Michigan Chronicle newspaper and publisher of LivingWELL Magazine.