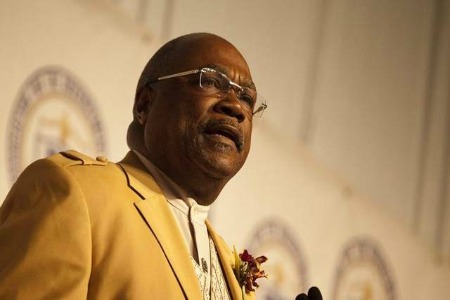 If ever the words of the Declaration of Independence authored by Thomas Jefferson were screaming out loud today in the state of Michigan – and more specifically in the city of Detroit – it is now! In case you have forgotten, let me remind you what the framers of our Constitution and ultimately these United States declared to the world:

“We hold these truths to be self-evident, that all men are created equal, that they are endowed by their Creator with certain unalienable Rights, that among these are Life, Liberty and the pursuit of Happiness. — That to secure these rights, Governments are instituted among Men, deriving their just powers from the consent of the governed.”

The key phrase here is “consent of the governed”!

The Governor of the state of Michigan has imposed upon the citizens of Detroit what amounts to be one man with the power to dictate their very future and quality of life in this city. Mr. Governor, you did it! And now you must own it!

Mr. Kevyn Orr has credentials that any mother or father would be most proud to claim for their own. It is not the man, it is the plan and the process by which he has arrived in town. Lest we forget – 2.3 million Michiganders by a margin of 52% – voted to repeal Public Act 4!

The Governor of the state and certain members of the state legislature went against the consent of the people, changing the law to suit their own purposes and to enshrine a repeal-proof law in which the people would have no say. Yet the people will always have their say!

For those who say that democracy and the right to vote is not a factor in this equation: You are totally wrong! Read your constitution! Remember how we got here in the first place! Many folks stayed home and did not vote from around the state. Many voted against their own interests leading to policies which are choking the quality of life out of their communities today.

One cannot reduce the value of the right to vote today and then expect to motivate the people on the value of their vote tomorrow! Mr. Orr knows that voting matters because he worked with the Obama campaign during the last election on the issue of voter protection. How can he now ignore the fact that the city of Detroit – under his tenure – may very well become the nation’s “olympics” of voter suppression. City services such as public lighting, police, fire, water, education, economic access are all vital to our community. They are obtained and provided in many cases by the public policies of those whom we elect to office. Our right to elect public officials to represent our community should not be traded on the bargaining table of economic distress. For many, this is a new poll tax. One can simply make the argument that based upon your inability to pay your bills, you should – in fact – lose your right to engage in the electoral privileges of our nation.
Where will this slippery slope end? Will some legislature introduce a bill that suggests that since some municipality is under financial distress that they should no longer be able to participate in national elections? Are we headed down the road to suggest that due to economic distress, you are not entitled to the educational benefits, national healthcare or the guarantees of the Constitution of the United States?

Emergency managers perform 3 particular functions: Cut, Slash and Sell! Our city cannot cut its way into the future or slash its way into stability or wind up selling every asset that it has to stimulate growth in the economy. What in Detroit will you sell to the highest bidder? Will the time for the Emergency Manager be extended for 18 months at a time because the Governor does not like the plan of the City Council when submitted, thus eliminating the Emergency Manager?

Mr. Orr represents Wells Fargo – one of the nation’s largest banks engaged in foreclosures in the United States. At least 7,800 foreclosures are occurring right now on Wayne County’s new list. Mr. Orr represents the Amway Corporation – in which Richard DeVos, a founder – was a lead voice in implementing the right to work effort which is now law in the state of Michigan. Coming from the Jones Day law firm with at least 828 partners and 2400 attorneys throughout the United States, Europe and Asia – they are among the world’s most prominent firms.

As we travel down this road of emergency manager, we must remember that the Chrysler Corporation – which Mr. Orr helped to restructure – had 2 ½ financial bailouts going back to Lee Iaccoca and President Jimmy Carter. The second beginning with President George W. Bush on his way out and being enhanced by President Barack Obama during his first term in office – providing billions of dollars in aid to the corporation. No, we do not regret or resent the auto companies for any loans or aid they received. We support the US auto industry – just as they were instrumental in supporting our nation during a time of war where Detroit was known as the arsenal of democracy. Mr. Orr also was a key factor in the restructuring of the banking industry leading to 1.7 trillion dollars in bailout monies (TARP) supposedly to be invested in financially distressed communities which has not yet found its way into cities like Detroit.

If Detroit is truly “the olympics of restructuring,” according to Mr. Orr then where is the bailout money for this city? Anyone who attempts to restructure Detroit must also engage in some restructuring of the banks, the job providers, the state legislature and the Wall Street bond investors. Where is the new revenue? Where are the new jobs? 18 months is not long enough to erase a 50-100 year problem. The issues that confront us must not result in the creation of 2 Detroits; a Detroit for those who have and another Detroit for those who have not. Our security lies in citizens being prioritized, their voices being heard, and their quality of life being budgetarily made the number one issue. Mr. Orr appears to be a nice gentleman. But this is not about a nice, efficient, articulate and U of M Wolverine named Kevyn Orr.

Everyone must be at the table! Everyone – particularly the citizens of Detroit who have never left this city – must be included! The people have a right to protest, declare unfair and challenge this imposed dictatorship on the city of Detroit. Remembering the words of Marvin Gaye where many Detroiters have simply caught the Inner City Blues which “which makes you wanna holler and throw up both of your hands.”

Let us be clear: The individual whose hands are directly tied to the future of our city is the Governor of the State Rick Snyder. Mr. Orr may be out front, but behind the scenes calling the tune is our dear friend “The Nerd” – Governor Snyder!