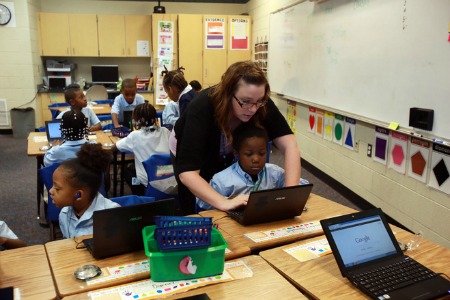 (Photo credit: Michaela McArthur, an instructional level 1 through 4 teaher at Brenda Scott Elementary and Middle School on Detroit’s east side.)

While many of the nation’s school boards, districts and authorities continuously look for ways in which to elevate students’ proficiencies in reading and math, the newly formed Education Achievement Authority of Michigan (EAA) recently announced significant gains in the aforementioned subject areas. The EAA reports that since the start of the 2012-2013 school year, more than 20 percent of its students have already achieved at least a one year growth in reading and math levels. EAA officials further reveal that more than 27 percent of its students in grades 2 through 9 have already achieved a one year or more growth in reading…with 22 percent achieving a one year or more growth in mathematics.

According to EAA’s assessment, the most significant growth was in 9th and 10th grade math, where 40 percent of high school students experienced a one year or more growth. Based on EAA’s projections, an additional 16 percent of its high school students are on track to achieve a one year or more growth when a final assessment is reviewed in late June of this year.

In addition, EAA saw the most significant rise in reading scores in its 6th through 8th grade sectors, which showed that 35 percent of middle school students already achieved a one year or more growth. Additionally, another 18 percent of middle school students are on target to attain a one year or more growth by late June. It’s important to point out that all student-measured growth is based on national norms that set the standards and skill levels for student proficiency in various areas of learning.

So why has EAA been successful in its quest to raise reading and math scores? At the beginning of the school year, students were given a Performance Series test from Scantron, a computer adaptive test which allowed teachers to quickly identify an instructional level for each student. Subsequently, students were systematically placed at instructional levels based on where they scored…not by age or grade level. Thus, individualized learning plans were designed and implemented to meet students where they were. Teacher then used a student-centered learning model and philosophy that allowed instructors to work with respective students at the learners’ instructional level.

The preliminary report of improved test scores is good news for EAA students, teachers, parents, administrators, and other stakeholders. It is also indicative of EAA’s philosophy of “changing the paradigm for teaching and learning in Michigan.” “Our model of teaching students is completely different from traditional ways,” says Michaela McArthur, an instructional level 1 through 4 teacher at Brenda Scott Elementary and Middle School on Detroit’s eastside where Marques Stewart serves as principal. “By using our student-centered learning model, we meet our students where they are. Therefore, we design our lessons and classrooms around what the students’ needs are. Students are then required to show teachers two or three pieces of evidence to demonstrate that they have mastered a learning target before they can move on. If they need more assistance to master a learning target, we give them the assistance.”

McArthur recalls that earlier in the school year, a very small percentage of students at Brenda Scott showed proficiency in math and reading. “Through student-centered learning…instead of teaching students, we lead them on the path of discovery,” says McArthur. “Students now seem to take more ownership in their learning. When they come to school, they come ready and excited to learn. It’s exciting to see so many students achieving such growth in a short period of time. Students, however, will be tested two more times before the end of the school year.”

Kinte Roberts, a 7th grader at Brenda Scott agrees with McArthur regarding excitement and learning. “My test scores in math and reading have improved because I really like how I am being taught,” says Roberts. “Math was really hard for me, but student-centered learning helped me to do better. Math is now making more sense to me. Plus, the behavior in the classroom, and throughout the school, is better now than it was…and that makes it better for students to learn.”

The concept for EAA was formed in June, 2011, with plans to operate the lowest five percent of schools in Michigan that were not achieving satisfactory results on a redesigned plan, or that were under an emergency manager. In September, 2012, EAA officially began operating 15 schools, six of which are high schools (Central, Denby, Henry Ford, Mumford, Pershing and Southeastern) and nine elementary/middle schools (Bethune, Brenda Scott, Burns, Law Academy, Murphy, Nolan, Phoenix Academy, Stewart and Trix). The typical school year for EAA students runs from September to August.

While EAA is proud of its system and effectiveness, the Authority knows there is still much work to be done. However, there is no denying the significance of the recent uptick in reading and math scores.

“These gains provide reassurance that our students are moving in the right direction and that student-centered learning is achieving the growth these students need to be competitive,” says J. Wm. Covington, EAA’s chancellor. “This is also a reflection of the diligent efforts implemented by our teachers and staff to ensure students have the tools needed to experience growth. The growth these students are achieving is clear proof that Detroit students can achieve and can compete with students anywhere if they are provided with an educational setting that meets them where they are and works with them individually to strengthen their performance. That is what EAA does.”