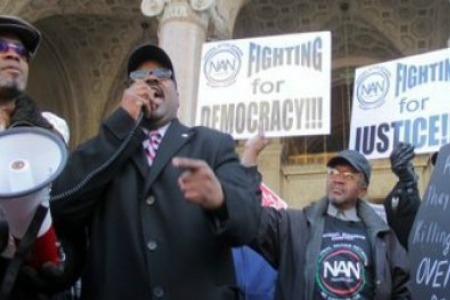 An expected state takeover has been the hottest of hot button issues in Detroit, and Gov. Rick Snyder’s Thursday announcement of a state takeover and the appointment of Kevyn Orr to the position of emergency financial manager (EFM) is likely to bring even more heat to the situation.

Many residents of the majority African-American city feel the appointment of an EFM is a form of political disenfranchisement. In Detroit, some are now engaging in political protest and civil disobedience in an effort to make their voices heard.

During Snyder’s Thursday press conference at the Cadillac Place building in Detroit’s New Center district, a crowd of picketers from Good Jobs Now, the National Action Network and other groups made clear their opposition to the EFM appointment.