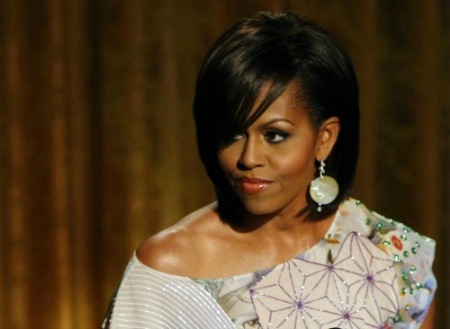 First Lady Michelle Obama (pictured above) has become the latest hacking victim in a string of alarming online assaults on big-named celebs and politicians whose personal finances have been publicly disclosed, reports the New York Daily News.

The Los Angeles police and now the FBI has stepped in to find the culprit/s who supplied the website Exposed.su with Mrs. Obama’s finances as well as the financial pictures of such A-listers as Donald Trump, Vice President Joe Biden, Arnold Schwarzenegger, Jay-Z, Beyoncé, and FBI Director Robert Mueller.

The site’s main page, which is titled “The Secret Files,” depicts a dark and zombie-like picture of a teen girl with gory makeup (pictured above) shushing the viewer with the words, “If you believe that God makes miracles, you have to wonder if Satan has a few up his sleeve.” Music from the macabre cable TV show “Dexter” is also playing in the background. Visitors are invited to click on a celebrity name to obtain their social security number, addresses, mortgage accounts, credit card, and bank accounts.

Interestingly enough, it is blatantly apparent that the site’s owner/s have a grudge against the President. When a visitor clicks on Mrs. Obama’s section of the site, in addition to obtaining her personal financial profile, the cryptic words, “Blame your husband, we still love you, Michelle,” is posted across the top of her page.

As of Tuesday afternoon, the site had received nearly 200,000 visitors. As to whether a lot of the information about the celeb’s finances is in fact accurate, it is unknown at this time.