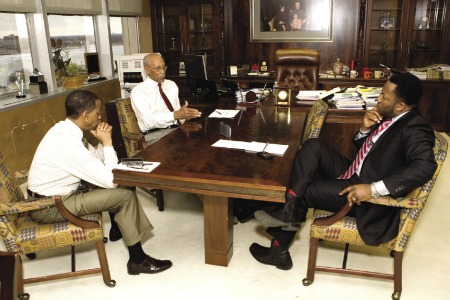 Detroit Mayor Dave Bing, in an exclusive interview with Bankole Thompson last week in his office, charged that State Treasurer Andy Dillon sent mixed messages to different Detroit civic groups, lamenting that he wished Dillon had been straightforward in his meetings with various government and civic organs in the city. Bing also said he is ready to work with the emergency manager whenever he is named and won’t sit at city hall without the power to effect change. The following are excerpts from that interview.

MICHIGAN CHRONICLE: From your vantage point, what is Detroit going to be under an emergency manager?
DAVE BING: I think the emergency manager, because it is an 18-months time frame, let’s be honest, you are not going to fix our problems in 18 months. But I think because of the emergency manager coming in with the support of Lansing, it means Lansing is going to have to come to the table more so than they have. Because it’s on his (the governor’s) watch as well as mine.

If we don’t fix some of the problems or at least start moving in the right direction, then we are all failures and I don’t think anybody wants that title. So the emergency manager from my vantage point is going to help us do some things that we couldn’t do.

DB: I think the City Charter is a major impediment. There was a rewrite of the Charter based on what was happening with the last administration. I think they went way too far and it handcuffs us from doing things that we need to do.
The first thing was a corporation counsel and that became a big issue. You couldn’t do what you needed to do. Then you couldn’t privatize, outsource anything without going through multiple steps that slowed the process down. You talk about the police commission. There were things that could have been done before that you can’t do now.
One of the things we need to do is to go back and look at what changes need to be made in the Charter and then talk about the process of so many things that need to be done going through city council for their approval.
And there’s been a lot of push and pull between the city council and the executive office because there are things that we feel like are the right things to do, we need to do and we need to move it fast. Tthey slowed the process down in a lot of cases. You can look at what’s happening at the pension board. There is a major issue there.
Look at labor agreements, those are impediments that keep us from moving as fast as we need to be.
So with the emergency manager he can get around all of that and make things happen quicker.

MC: What role will you play under an emergency manager?

I would not stay here and be somebody who just cuts ribbons and kisses babies. That’s not what I came here to do. If I can’t move my initiatives forward, which would be public safety, lights, public transportation, blight, recreation — those are the five things I think have the greatest impact on our citizens.

So I want to do what’s best for our citizens so that they can improve their quality of life. Once again, I need my team in place. A lot of people think that they know what is happening at city government. I can tell you they don’t. You’ve got to spend some time here to understand that. So somebody coming from the outside, coming in they need us to get through all of the minutiae and I think we can play a significant role.

MC: Would it make more sense to get an emergency manager from this area rather than someone from out-of-state?

DB: It depends on the capability, the intellect and the capacity of the person. If we had that kind of talent here, what would happen? The problem of getting somebody local would be the politics.

MC: Charlie Beckham, who worked for you and left your administration, has been shopping to be the emergency manager.

DB: Never happened. (Laughs) Wasn’t a serious candidate and Charlie worked for five different mayors in several different departments, and all of them are still screwed up. So how in the hell is he going to be an emergency manager and fix anything when he had the opportunity to work in certain departments and things didn’t get fixed?

MC: The governor disagreed with my assessment last week that an emergency manager is a huge gamble for Detroit. Do you feel that it is a gamble?

DB: It is a huge risk. There is absolutely no doubt about that. That’s why I’ve taken the position that I’ve taken. I’m more interested in… not about some political future. I’m not all hung up in my ego. We are here for one reason and one reason only and that is to solve some of the problems that this city has had for the last 40 or 50 years.
So if the state is going to step in and be helpful with that, I’m OK with it. Ultimately, what I think we have to do is work as hard as we can together and solve as many problems as we can in this 18-month period. And the city council has the authority to displace the emergency manager. If we don’t do that we are going to elongate the process. I don’t think anybody wants to do that. We must work together.

DB: I think there’s a misconception that an emergency manager is going to solve the problems. That’s not the case. What kind of resources will the emergency manager get to help solve the problems? He’s going to need some money. That’s got to come from the state. He’s going to need some people. I’m not sure where they are going to come from.
Without that, all the plans that we have in place, and we do have plans, won’t be executed. It’s all about executing the plans. So if you talk about a six-month window, is it a low hanging fruit? Probably so. Can we put some of the lights on? I think so, but you’ve got have money to do it. Can you put Belle Isle back on the table? I think so.

MC: Do you want to see council play a role?

DB: Council will play a role. I’m not sure what it is. It depends. I think the governor has made it clear, if you don’t want to work get out of the way. I’ve already said I’m going to work with the emergency manager because in order for us to move forward that needs to happen. There are some council people who may want to work with the emergency manager, there may be others that don’t want to. And the governor has made it clear

MC: There’s been talk in the political grapevine that the Office of the Treasurer under Andy Dillon played a different ballgame on the financial negotiations with Detroit than what was coming through from the governor’s office. Is this true and did you feel that way?

DB: Andy Dillon from a personality standpoint may not have been the right guy. I don’t know what his agenda is, but I think there is more than one agen
da. Andy got in the way and got in the mix of a lot of things that I don’t think he should have. That is, trying to interface with all of the constituencies here in Detroit whether it was faith based or my office, city council, labor.

MC: Do you think he was trying to be the mayor?

DB: Maybe the governor. I don’t think he wanted to be the mayor. But I wish that he had handled it a different way.

MC: You didn’t think it was appropriate talking to different civic groups in the community?