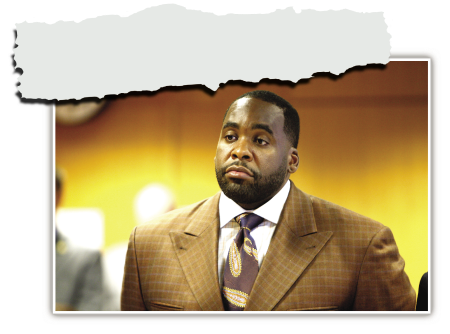 What the world witnessed in federal court in downtown Detroit on Monday in the sweeping corruption conviction of former Detroit Mayor Kwame Kilpatrick, his longtime friend and city contractor, Bobby Ferguson, and his father, Bernard Kilpatrick, was the bitter and painful ending of political power who once had the potential to not only make Detroit a game changer in the state but across the country.

It was the sad ending to a political story that carried with it the riveting campaign mantra “Right Here, Right Now,” the refrain that defined the rise of Kwame Kilpatrick as chief executive officer of the 11th floor of the Coleman A. Young Municipal Building.

Kilpatrick, once embodied an emerging political leadership that represented a class of brilliant Black men who could be pleading Black America’s cause before the nation’s conscience, the same path that Atlanta Mayor Kasim Reed is on now with his frequent appearances on “Meet the Press,” on NBC, making the case for urban America while being a no-nonsense surrogate for the Obama administration.

He once symbolized a new generation of bold Democratic leaders who had the propensity to expand their base beyond their own traditional lines of operation with the ability to build crossover relationships with various constituencies and communities.

To put it bluntly, Kwame Malik Kilpatrick could have been a United States senator from Michigan because he was on that path to national political stardom. It was in 2004 that he was made a guest speaker at the Democratic National Convention in Boston, the same year that then Sen. Barack Obama was introduced to the nation and the world when he keynoted that same convention.

It is worth noting that very few in the political class ever, in a lifetime, get the opportunity to address a national political convention, the hallmark of political power, and a speaking slot reserved only for those whose life stories or real promises of political leadership have the potency to affect the course of the nation. These are two skillful men who chose a different destiny for themselves.

Years later, one man headed to the White House to change the course of history for generations to come by entering into the pantheon of American history as a major political force, and to put America on the map as a leader on the ever evolving question of a multiracial democracy fighting to expand itself and to continue to give full meaning to the notion that “all men are created equal,” because a competent Black man is now the occupant of 1600 Pennsylvania Ave.

The other man wallowing and wiggling in hubris and intoxicated with political power began to sink into the pool of political and legal troubles that would arrest his future. Kilpatrick, blinded by his own follies and youthful exuberance coupled with some opportunists masking as trusted advisors whose only response to a new and exciting leadership abounding with untold opportunities for success, was “Yes sir,” instead of protesting and resigning to send a signal when the ship, by all accounts, was headed for a Titanic-type calamity.

Instead of trying to change course quickly in the middle of the political ocean he was swimming in, the former mayor displayed arrogance and thought everyone was fixated on him, or obsessed with the earring he wore and later stoppd wearing after multiple complaints to his advisors about how a sitting mayor wearing an earring like a rap star defies the conventional appearance pattern of an executive of a major city.

Many reminded Kilpatrick that he was not elected as “the hip-hop mayor.” He was elected as mayor of the city of Detroit. He blamed the media for all of his issues and not once pointed the finger at himself as an elected official who swore to uphold the public trust.

While the media has an obligation to always report the facts and to do so without bias or animosity, Kilpatrick was the one elected by the people of Detroit, not the media that he waged a very public battle with.

Every politician wages battles with the media, but the smart ones soon realize that the media did not elect them and thus fighting an unwinnable battle was hopeless.

Inasmuch as the media exists to serve as the space between the elected and the electorate, ensuring transparency and accountability, the obligation for Kilpatrick was to those who chose him to serve when he rode triumphantly into office at only 31 years of age, becoming one of the youngest mayors of a major city in the country’s history.
U.S. Attorney for the Eastern District of Michigan Barbara McQuade, who was named by President Obama to the post, said in prosecuting the “Kilpatrick enterprise,” her office was sending a strong message to those called to elected office to work diligently for the people, not to line their pockets.

Elected office is a privilege and an honor and should not be the center of gravity for things that defy the spirit of that office.

Much has been made about individuals and companies who collaborated with Kilpatrick and others indicted in the corruption schemes that were unraveled in federal court. While it is true that the collaborators should be held accountable as well, the burden of demonstrating stewardship of the public trust is on the official elected by the people or appointed to serve the people.

In any case, where tax dollars are at stake, there should be a higher degree of accountability, probity and transparency. That is the standard all public officials should be held to.

The trial of Kwame Kilpatrick represented one of the most intriguing legal cases and certainly will be remembered as an instructive study for everyone seeking to enter public office about what to avoid that will create the appearance of impropriety.

With this trial came one of the most racially diverse juries in the history of the Eastern District of Michigan, including five African Americans and one Hispanic, who were part of the jury that rendered the verdict on a man who once symbolized Black electoral power.

The diversity of the jury pool at the federal system has been a source for concern until the federal court commissioned a study to look at ways to enhance racial diversity on juries with federal judges Denise Page Hood and Victoria Roberts leading the study, backed by Chief Judge Gerald Rosen.

All three judges representing the federal bench and McQuade as well as the Chief Federal Defender Miriam Siefer engaged on a series of community conversations to address the importance of jury service and racial diversity on juries.

The result was Kilpatrick having one of the most racially diverse juries in the judicial system in Detroit as a benefit of democracy, and the effort of the court taking an inward look at how it once operated. The challenge now is for the court to maintain that standard of racial diversity.

The challenge for elected officials and those candidates filing for public office to run for mayor and city council is to not repeat history and to show the world that Detroit is far more than the sum total of the Kilpatrick conviction.

The conviction of the former mayor should belong to the gallery of public corruption, period, which happens everywhere, and not to the image or the character of Detroit. It is biting because Kilpatrick leaves his sons behind and a wife who will now have to confront the challenge of ensuring a future for those children. His public malfeasance abruptly ended his mother, former Congresswoman Carolyn Cheeks Kilpatrick’s service in Congress when she lost reelection.

The convictions on racketeering and extortion should symbolize greed by a select group of individuals who abused their power, and not a blanket condemnation of Detroit’s present leadership.

Th
e lesson in the Kilpatrick saga can best be summed up in Fyodor Dostoyevsky’s book “The Brothers Karamazov,” a work that demonstrates one of the greatest sagas of political literature with moral struggles at the core of the human experience, and how one emerges depends on their own fortitude. The question is, can we balance the scales so that evil does not outweigh good?

Could Kwame Kilpatrick have balanced the scales so he wouldn’t have been weighed down by corruption?

Dostoyevsky, the father of political and moral literature, should be recommended reading for public officials and those seeking public office to gain profound insight for enlightened leadership that benefits from classical exposition.

Dostoyevsky said, “Man has it all in his hands, and it all slips through his fingers from sheer cowardice.”