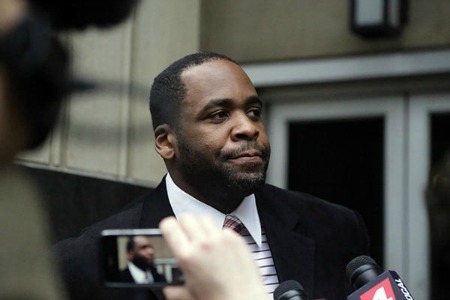 Yesterday’s historic conviction of former Detroit mayor Kwame Kilpatrick sent city residents in a tweeting frenzy. Taking to social media to express their thoughts on the verdict, Detroiters created a whirlwind of response. Quickly making #kwame a trending topic, some expressed profound disappointment while others celebrated what they consider justice being served.

Some individuals have made a huge mockery of the entire situation, posting “poke fun” images be better suited for Instagram. Others carried a theme of “Free Kwame”, expressing their support through planned parties and even t-shirts.

What many believe is Detroit’s “trial of the century” has been a long-standing case. It is one that lasted over a span of five months and fifteen days of deliberation. The jury found Kilpatrick guilty of 24 counts, including racketeering, mail fraud, extortion, wire fraud, tax evasion charges and bribery.

The former mayor is no stranger to social media himself, though his profile was noticeably silent following his conviction. During the trial, he directly responded to friends and fans, expressing gratitude for their support.

Kilpatrick’s last tweet under the handle @KwameandFamily was made on Saturday, Mar. 10 just two days before returning to court to learn his fate.

His account might remain frozen for a while, but people in Detroit and across the country are sure to continue expressing their opinions in the days following the monumental conviction.