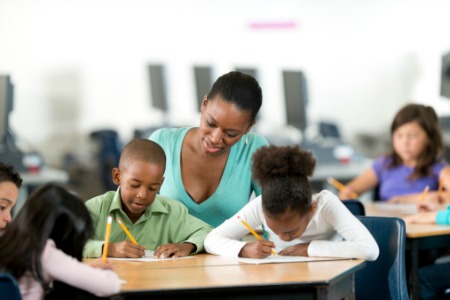 Carlsson-Paige is professor emerita at Lesley University, where she taught for 30 years. Her newest book is Taking Back Childhood: A Proven Roadmap for Raising Confident, Creative, Compassionate Kids.

In 2010, Carlsson-Paige was one of over 500 early childhood experts who signed a petition warning that Common Core would be harmful to young children.

The Common Core standards do not reflect the “development characteristics and needs of young children. They are imposing expectations on young children that are inappropriate in a variety of ways,” she said.

Make sure to read our report from last year, “Is Your Child’s Education Improving Under New ‘Common Core’?”

One of the main problems, Carlsson-Paige believes, is the Common Core requires K-3 children to “learn specific content, facts and skills at certain ages.” But children, especially young children, develop at different rates. To get children to learn the same things at the same time, teachers must “drill them,” which has resulted in “an enormous increase in direct teaching and direct instruction.”

In states that have embraced the Common Core, the direct instruction is replacing proven techniques that early childhood education experts advocate.

“The direct instruction has replaced hands on, active learning and play, which really are the bedrock, or cornerstone activities of early childhood that really solidify learning,” Carlsson-Paige explained. “Children learn through active engagement and play in the early years. Skilled teachers know how to connect skills appropriately to play as they see what children are doing and where they are on the developmental spectrum.”

The direct instruction is damaging to children, she said, because it encourages children to believe that “the information is outside of themselves, rather than they have a capacity construct it from within.

“All of these messages are very damaging. Many children are feeling a sense of failure in early classrooms because they are being asked to learn things they can’t understand easily and they can’t make sense of.”

The Common Core State Standards were not developed by the federal government. They were written by the National Governors Association and the Council of Chief State School Officers.States adopted the Common Core as part of the “Race to the Top” initiative from the Department of Education. States competed for education dollars by showing how they would change their education system. To compete for the Race to the Top funds.