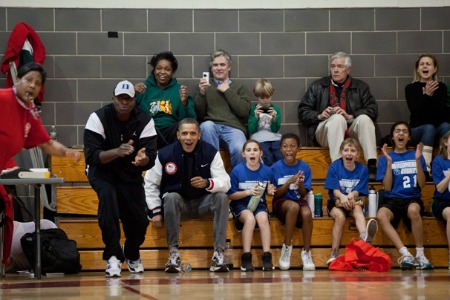 The President is an avid basketball fan and looks like the youngest First Daughter is following in his footsteps.

President Barack Obama was spotted at this 11-year-old daughter Sasha’s basketball game this weekend. According to the Associated Press, the Vipers of the prestigious Sidwell Friends School had a game Saturday morning at a community center in Chevy Chase, Md., just outside Washington.

Last year, the President — who was a baller himself in high school — served as the team’s assistant coach for at least one season.

In an interview with the Washington Post, the Commander-in-Chief said watching his daughter play has brought him more joy than ever. “I bleed when those girls play,” he said. “I can’t take too much credit for it. What you see is them progressively improving, coming together as a team, running plays, things kicking in that you practice. It’s a great, great joy to watch.”

According to reports, President Obama returned to the White House after the game.