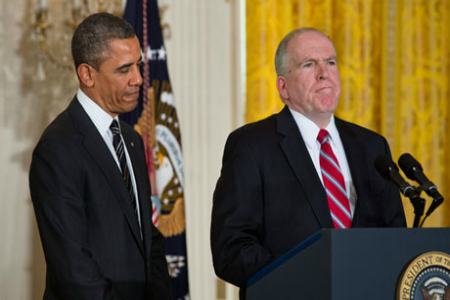 Washington (CNN) – The U.S. Senate approved John Brennan as the next director of the Central Intelligence Agency Thursday after a Republican senator ended his delay of the vote earlier in the day.

Brennan was confirmed by a 63-34 vote that crossed party lines. His elevation to the post was widely expected, though he faced vocal opposition from critics like Sen. Rand Paul, who filibustered the vote and demanded more answers from President Barack Obama’s administration on when they might use unmanned drones to target Americans suspected of being terrorists.

Paul, who led the marathon session on the Senate floor that officially ended Thursday afternoon, said he was satisfied with a response from the Justice Department over whether the president has the authority to use a drone to kill an American not engaged in combat on U.S. soil. Attorney General Eric Holder said firmly that he did not.

Earlier, the Obama administration agreed to provide members of the Senate Intelligence Committee with additional legal opinions related to the targeted killings of Americans who are involved in terror-related activities that threaten the United States or its interests. The White House had previously turned over other opinions about the drone operation to the committee, but some members wanted more information before agreeing to vote on Brennan’s nomination.

Brennan has been a top architect of the Obama administration’s drone program, which came under scrutiny after the killing of American-born cleric Anwar al-Awlaki in September 2011. He was grilled on the program during confirmation hearings, along with his stance on torture methods that were used during the administration of former President George W. Bush in the aftermath of the September 11, 2011 terror attacks.

Sen. John McCain, one the Republican lawmakers who threatened to hold up a vote on Brennan’s nomination in the full Senate, questioned Brennan’s stance of torture, saying two weeks ago on CNN’s “State of the Union” he was unclear where the nominee stood on the issue.

“Mr. Brennan said he was opposed to waterboarding and torture, but at the same time he has said it has saved lives. I would like to know what lives were saved because the information I have is it saved no one’s life. In fact, it was a lot of misinformation,” he told CNN’s Candy Crowley.

McCain, along with fellow GOP Sen. Lindsey Graham, also demanded answers about the September attack in Benghazi, Libya. The two Republicans have been leading voices on the charge against the administration over the attack, which killed four Americans, including the U.S. ambassador.

Brennan will replace retired Gen. David Petraeus and acting CIA Director Michael Morell at the CIA. Petraeus stepped down from his post in November amid revelations he had engaged in an extramarital affair with his biographer. Morell, a career intelligence officer who was serving as the spy agency’s deputy director, stepped in as acting CIA director upon Petraeus’ resignation.