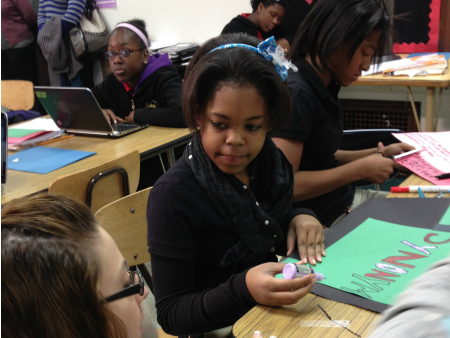 The Education Achievement Authority of Michigan (EAA) today announced gains in student academic growth since the start of school. The preliminary results of tests administered in late January and early February show that in reading, more than 27 percent of EAA students in grades 2 through 9 have achieved one year’s growth or more and in mathematics 22 percent have already achieved one or more year’s growth. Preliminary data also shows that in reading, 48 percent of EAA students are on track to closing their achievement gap by August and in math 43 percent are on the same trajectory.

The most significant growth is in high school mathematic scores grades 9 and 10, where 40 percent of students have already achieved one or more years growth and an additional 16 percent are on track to achieve one or more year’s growth by the final assessment in late June.

The most significant growth in reading scores is in middle school grades 6 through 8, where 35 percent have already achieved one or more years growth and an additional 18 percent are on track to achieve one or more year’s growth by the final assessment.

“These gains provide reassurance that our students are moving in the right direction and that student-centered learning is achieving the growth these students need to be competitive,” said J. Wm. Covington, Chancellor, EAA. “This is also a reflection of the diligent efforts implemented by our teachers and staff to ensure students have the tools needed to experience growth.

“The growth these students are achieving is clear proof that Detroit students can achieve and can compete with students anywhere if they are provided with an educational setting that meets them where they are and works with them individually to strengthen their performance. That is what EAA does.”

The definition of a year’s growth in this context is based on national norms. A national sample has statistically determined the amount of growth by standards and skills that a student must master.

“By ensuring that students are achieving more than one year’s growth, we increase the likelihood of closing the achievement gaps and increasing proficiency,” said Mary Esselman, Chief Officer, Equity and Accountablilty, EAA.

“A year’s growth is similar to the number of skills a student will learn in one school year in a traditional school setting,” Esselman said. “By the last assesment we administer in late June, it is our goal to experience one or more year’s growth for a majority of our students in order to close the achievement gap and see the needle move in proficiency for the 2013 MEAP test.”

Students in the 15 EAA schools were administered a Performance Series test at the begining of the school year to identify the instructional level of each student. Students were then placed in instructional levels starting at their level of achievement and provided individualized learning plans, thus meeting students where they are. Under the student-centered learning model, teachers work with each student at his or her level to build on their skill level.

The EAA utilizes the Performance Series test from Scantron, a computer adaptive test that lets districts quickly identify the proficiency level of each student, across a range of subjects that meet state and national standards and aligns with common core competencies. This type of test ensures accurate student placement; analysis of instructional needs, including any instructional adjustments needed and measurement of student gains across reporting periods.

In late January and early February, a second assesment was administered to students and the preliminary results are on pace with national growth targets. A complete report will be available in March covering all subject areas.

“What we learned is that while students were identified on a certain grade level coming into the EAA, most were not proficient at that grade level. These assessments helped identify their proper levels of proficiency.”

The EAA was created to operate the lowest performing 5 percent of schools in Michigan not achieving satisfactory results on a redesign plan or that are under emergency manager. The EAA has a portfolio of schools to provide a new, stable set of public schools that create the conditions, supports, tools and resources under which teachers can help students make significant academic gains.

“We are turning schools into creative, innovative learning environments that provide students a good education. The EAA offers struggling students the opportunity to catch up to their peers around the state and receive the better education they need to get them college, career and workforce ready,” Covington said.

About the Education Achievement Authority of Michigan

The Education Achievement Authority of Michigan is a new statewide system of schools that will operate the lowest performing 5 percent of schools in Michigan not achieving satisfactory results on a redesign plan or that are under an emergency manager. It is designed to provide a new, stable, financially responsible set of public schools that create the conditions, supports, tools and resources under which teachers can help students make significant academic gains. It began operating its initial schools in the 2012-2013 school year.