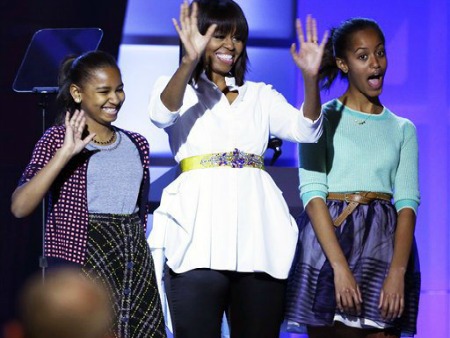 First Lady Michelle Obama (pictured), who is in the third year of her Let’s Move! exercise initiative, revealed during her very first “Let’s Move!” Google Plus fireside hangout on Monday that she does not want her daughters to be “weight-obsessed.” The chat, which was attended by more than 3,500 viewers, was moderated by “Live with Kelly & Michael” talk show co-host Kelly Ripa. Mrs. Obama fielded questions from select participants, who submitted health and weight loss stories on Google Plus and YouTube and a third grade class from Brewer, Maine, reports iVillage.

Mrs. Obama joined Google Plus to discuss the importance of exercise particularly among young people, and as a bonus, attendees of the chat received a glimpse inside her household to see how she manages to implement healthful living for daughters Malia, 14 (pictured right) and Sasha, 11 (pictured left).

In the Obama household, the First Lady decided to make healthier choices, starting with adding more exercise to their daily regimen and making smart dietary changes like drinking less juice and adding more fruits and vegetables.
When the First Lady was asked what advice she would offer young people struggling with weight, she responded that the topic is one that has been discussed in her home.

“You know, when I talk to my kids…we were going through some of these similar challenges,” Mrs. Obama said, addressing a young man who said he had once weighed 400 pounds as a 19-year-old. “Obviously, when my kids were little, they weren’t faced with the huge challenges you were faced with. But I never talked about weight in the household. We just started making changes and we made changes in a way that didn’t…make them feel badly about themselves, said the First Lady.

Mrs. Obama contends that the oneness of weight and portion control should be placed on the adult in a young child’s life. ”Truly kids that age can’t control what they eat,” she said. “So as the Mom, I took it upon myself to make sure that we just surrounded them with foods that were healthy and that they could eat whenever they wanted to.”

What was stressed overall during the chat by Mrs. Obama was that someone’s overall wellness lifestyle dictates health in the long run and that obsessing on the numbers on a scale is not what’s important, rather being active and eating right are the crucial factors.

“I have two young daughters. We never talk about weight,” she said. “I make it a point… I don’t want our children to be weight-obsessed I want them to be focused on, ‘What do I have to do in this body?’ Because every body is different. Every person’s body is different.”

She mentioned that her girls get plenty of exercise by doing such things as playing sports and walking their dog, Bo, every night after dinner. She also admitted to turning on the radio and busting a few moves with her girls for a good 30 to 40 minutes until they work up a good sweat, “They laugh at me; they have a good time, but at the same time they’re moving,” she said.