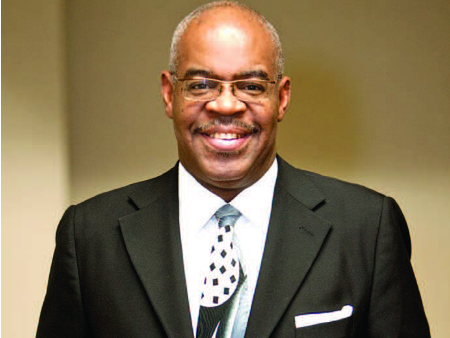 That Jerome Harvey has been a successful entrepreneur for more than three decades should come as no surprise to those that know him. Harvey grew up an only child in Albion, Michigan, a small town nestled between Jackson and Battle Creek, where he developed the self-reliance that has aided in his achievements as a businessman. His parents were caring and nurturing, yet demanding of young Jerome.

“I stand on the shoulders of my parents, there’re no two ways about that,” he says. “They were big believers in education, having a good work ethic and learning how to do things.” And growing up in a town that at the time had less than 5,000 people also proved beneficial. “We were encouraged by our neighbors to do well,” he says of those growing up in Albion. “It was expected of us.”

Harvey left Albion to attend Eastern Michigan University, where he earned a bachelor’s degree in business administration. It was during his sophomore year, however, that his future began to come into focus. That’s when he decided that one day he would be an entrepreneur. “I was pretty clear on what I wanted to do. I felt I was going to be an entrepreneur. I’ve always been entrepreneurially driven.” Harvey landed a job at General Motors after college. His career at the automotive giant included engineering, purchasing and serving as a Launch Team Leader.

He spent eight years at GM, calling it the greatest education he has ever had from a manufacturing perspective. “GM was a good career step for me. It was a great opportunity to learn and understand the corporate culture,” he said. “And there were also many opportunities to learn new things and take on new challenges. I always tried to be the first to raise my hand and say I’ll take on a new assignment. It was just a great learning experience.”

The diverse business offerings allow Harvey Industries to become a one-stop shop for its customers. Specifically, it allows Harvey to control the quality of his products and gives him an advantage in delivery speed. “We’re able to respond quickly to customer needs, and that has been a substantial part of our growth,” he says.

Harvey is a graduate of Dartmouth College’s Tuck Executive Program. He has also served as a member of the Eastern Michigan College of Business Development Board, the National Association of Black Suppliers (NABS), the Michigan Minority Supplier Development Council (MMSDC), the North Ohio Minority Business Council, the Ann Arbor-Ypsilanti Chapter of Kappa Alpha Psi, and the Detroit-Windsor Chapter of the American Foundry Society.