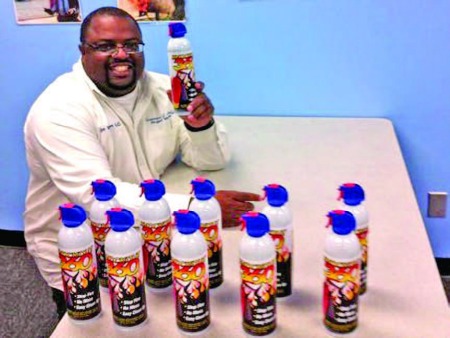 Local inventor Lawrence Hardge launched a national campaign to roll out his newest product, KnockOut 360. More than 15 years in the making, KnockOut 360 is an advanced fire extinguisher made of environmentally safe chemicals.

According to Hardge, the product terminates fires instantaneously without leaving residue like traditional extinguishers. KnockOut 360 was picked up by Harvest Growth, the national infomercial company that created the well known OxiClean, Kaboom and Snuggie campaigns. Infomercials have begun airing around the country. The product is expected to be sold in stores later this year.

With a background in chemistry and engineering, Hardge developed the concept for the product after the 1996 crash of a ValueJet airplane in Florida, which was due to a fire in the cargo compartment. A combustible combination of oxygen and heat led Hardge to create a fire extinguisher that removes heat from fire but not the oxygen.

“I have a passion for creating products that will benefit mankind,” said Hardge. “I have always been intrigued by how things function and how to make them better. As long as I can remember, I have always broken things down and rebuilt them adding my own twist.”

Hardge is also the inventor of other innovative products, including the DoggoneIT collar clip which alerts owners, via remote alarm, if their dog is exposed to dangerous temperatures; BabysitIT, an invention designed to alert parents and guardians when their children are separated from them by a predetermined distance; and the EZStrollIT, which is a versatile seat that converts from a safety-approved child car seat into a stroller.

Traditional fire extinguishers can cost upwards of $50. The cost of KnockOut 360 is $15 which makes the product perfect for usage in urban centers where delayed responses from fire departments could potentially lead to fatalities.
By lending his experience and expertise to novice inventors, Hardge also plans to open the doors of opportunity for other minority inventors.

“Detroit has some very talented inventors — a new generation of George Washington Carvers — but their voices are not heard,” says Hardge. “It is difficult for a minority to get their product out into the marketplace unless he or she is validated by a major company. I want to use my knowledge to help them bring their products to market.”

With offices in Detroit and a warehouse in Wixom, Michigan, Hardge seeks to provide jobs for Detroiters and establish partnerships with businesses that will provide distribution sites for his products.