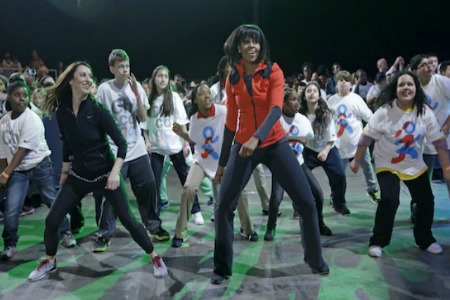 The project’s national announcement was also made on the popular TV daytime medical show, “The Dr. Oz Show.” The new initiative was launched to help encourage children to have physically active lives. A mere one in three children incorporate some form of exercise into their lives, according to the First Lady. The problem stems from many schools scaling back on their physical education programs and re-prioritizing resources to classroom instruction.

The First Lady recently discussed the health risks associated with inactivity. She noted that a lack of exercise is “not just bad for (children’s) bodies, it’s also bad for their minds, because being less active can actually hurt kids’ academic performance as well.”

“Lets Move! Active Schools” is designed to make active lifestyles normal in the minds of children. Mrs. Obama also points out that activity and fun should go hand-in-hand. She added that when children have positive experiences with physical activity early on, it shapes their attitudes for healthy living well into their adult lives.

The program’s goal is to sign on at least 50,000 schools to become active over the next five years. Footwear manufacturer Nike has sanctioned the project by investing a hefty $50 million. The donated monies from the sneaker king will assist schools in creating environments that will motivate children to get in an hour of physical activity before, during and after their school day.

The First Lady has spent the last week promoting the new and exciting venture and is urging school officials and others to sign up and get moving by visiting the website www.letsmoveschools.org.