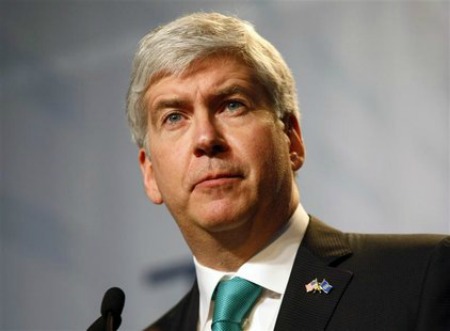 Michigan Gov. Rick Snyder today declared a financial emergency in Detroit, the climax of the fiscal crisis that has engulfed Detroit.

Snyder speaking during a live broadcast town hall meeting on the campus of Wayne State University said it is time for people to come together and get the city from its current economic malaise.

Snyder said he already has a “top candidate” to take the job of emergency manager and that there are other candidates as well. The governor would not name names.

With the declaration of a financial emergency, the city of Detroit has 10 days to appeal to the state, during which a hearing will be held, according to Snyder.

The State Emergency Loan Board will eventually select the Emergency Manager for Detroit, Snyder said.

“This is not the time for fighting and blame. I want to solve it. I want to help you solve it. So people can have a great quality of life, Snyder said. ” I would appreciate your support on this.”

The governor said he’s been meeting with ministers in the city as well as other civic leaders and called them “very good meetings. People in the neighborhoods know what’s best for the community.”

Carol Goss, CEO of the Skillman Foundation asked the governor about citizen participation in the event of an emergency manager. Snyder said there will be opportunity for Detroiters to engage the process without defining what that process will be.

Peter Hammer, a law professor at Wayne State University Law School asked a pointed question about why the governor would be having a town hall on an emergency manager for Detroit, when there are other regional issues like transportation.

“He artfully dodges the question,” Hammer said about Snyder.

“The root cause of the problem are the segregation of race and wealth and until you address the segregation of race and wealth you are not going to have a viable formula to address the financial well being of the city,” Hammer said “To not mention race in the discussion about Detroit and its financial crisis in the context of the region is just irresponsible.”

Hammer said there should be investment in human capital, invest in children, something that’s been absent in the conversation.

Bankole Thompson is the Editor of the Michigan Chronicle. He is the author of book series on the Obama presidency. His book “Obama and Black Loyalty” published in 2010 follows his recent book “Obama and Christian Loyalty” with an epilogue by Robert S. Weiner former White House spokesman. Thompson is also a Political News Analyst at WDET-101.9FM Detroit (NPR Affiliate) and a member of the weekly “Obama Watch” Sunday evening round table on WLIB-1190AM New York and simulcast in New Jersey and Connecticut.