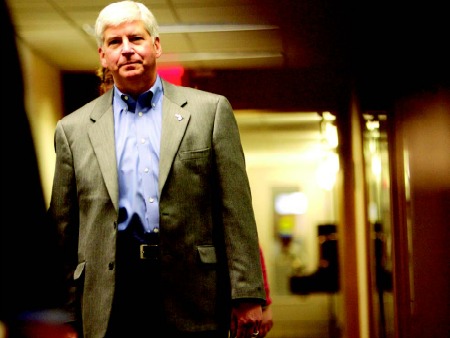 According to the Detroit Financial Review Team, Detroit’s financial situation is so grave that there is an expected cumulative deficit in excess of $100 million by June if no financial countermeasures are adopted to stop the depletion of cash.

The anticipated unanimous report from the six-member review board created under Public Act 72 of 1990 (Local Government Fiscal Responsibility Act) is widely seen as the final act before Gov. Rick Snyder appoints an emergency manager for Detroit.

“While the mayor and city council deserve credit for considering and, in some instances, adopting difficult financial reforms, those reforms are too heavily weighted toward one-time savings and apply only to non-union employees who represent only a small portion of the city’s overall wage and benefit burden,” the report said.

While we appreciate the steps the city has taken over the past number of weeks, key reform measures have not occurred quickly enough, if at all. The team collectively believes the city needs assistance in making the difficult decisions necessary to achieve the significant reforms that are so crucial to the city’s long-term viability.”

Detroit Mayor Dave Bing fired back at the review report saying his administration has a plan.

“Certainly I am not surprised by the findings of the state’s financial review team. My administration has been saying for the past four years that the city is under financial stress,” Bing said. “If the governor decides to appoint an emergency manager, he or she, like my administration, is going to need resources, particularly in the form of cash and additional staff. As I have said before, my administration will stay focused on the initiatives that most directly impact the citizens of Detroit: public safety, public lighting, transportation, recreation and neighborhood blight removal.”

Gov. Snyder, instead, offered a broader response to the city’s fiscal crisis, citing the many structural issues Detroit is facing, such as population decline over the decades. Many moved out for lack of quality services.

The governor also mentioned how the city is behind in its technology infrastructure, which also affects how the financial apparatus of the city operates.

During an exclusive interview Snyder said the city should find a system that works instead of the current ailing system that is part of the overall structural problem Detroit has.

“Instead of saying we are going to modify this (system), stop and bring in something brand new. And they may ask people to change how they’ve been doing things for 20 or 30 years, but we know what works, because it’s working in other communities,” Snyder said.

The governor noted that instead of operating as a city with a million people, Detroit should make decisions as reflected in the latest census report which showed the city’s population dwindle to around 700,000.

Snyder still maintained that even though some are expecting him to make a decision in a week about Detroit’s fiscal crisis, he has 30 days to make that decision.