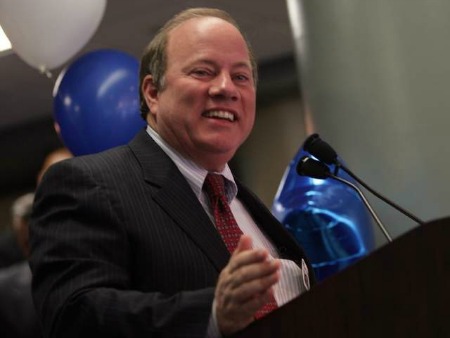 Speaking to a cheerfully enthused crowd at the Samaritan Center, Mike Duggan announced on Tuesday, Feb. 26 that he will run for mayor of Detroit.

Promising to reduce crime and bring financial management to the city, Duggan cited several items on a prospective to-do list. They include fixing broken streetlights, and bringing more people into Detroit’s vacant but habitable homes.

Duggan noted the strength of Detroiters based on what he has witnessed through meeting individuals around the city. He vowed to make a commitment to build the city up and not disregard any parts of its community. Duggan also responded to the possibility of an emergency financial manager, expressing that he would continue to make a case to Governor Rick Snyder that appointing someone to take over the city has no proven track record of success. If an emergency manager cannot solve the problems of smaller cities like Ecorse and Benton Harbor, how will it eliminate the challenges faced by the largest city in the state?

“I think you could get further working in partnership and by allowing the voters of Detroit to pick the next mayor in November,” said Duggan.

Duggan’s sentiment is one he shares with many throughout the city and local leaders alike. His official announcement comes just shortly after Detroit’s branch of the NAACP held a press conference addressing its disapproval of the possibility of an emergency financial manager.

Will a general consensus on such a major issue be enough to earn voters in November?