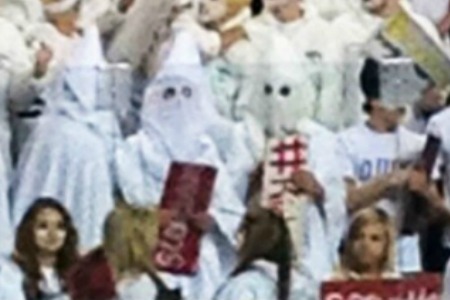 The three students, who attend Red River High School in Grand Forks, North Dakota were photographed sitting in the stands during a Friday night hockey game, wearing traditional KKK garb. According to ABC News, the students put on the gear after the first goal and were caught wearing it for about 30 seconds to a full minute. The students may not have been noticed upon first glance because they were sitting in a section for fans called Red River Roughriders and in that section, everyone dresses in white as a part of the “whiteout” that many hockey fans have been doing at games for the last 25 years.

The photo made its rounds on social media and was shared over 97 times, along with disappointed commentary from many. The school’s principal, Kristopher Arason made a statement to the Associated Press, saying, “We, as a school, are extremely disappointed with the behavior of these three students. This behavior is not a representation of our school or student body.”

Looks like someone is in denial of just how far their student body is willing to go for a giggle.