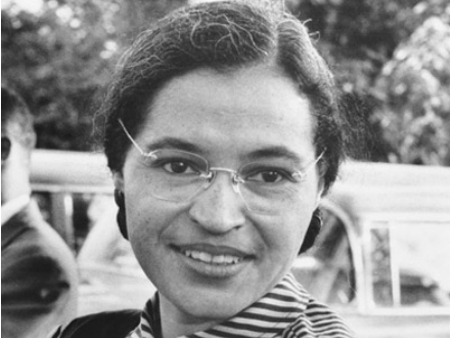 Congressman Jesse L. Jackson, Jr’s footprint will forever be stamped in the Capitol as a result of two pieces of legislation that he passed during his 17 years in Congress.

In light of his curent legal problems these two items may not be mentioned at the ceremony unveiling the new statue of Rosa Parks going into Statuary Hall on Wednesday, February 27, to be on display there for all time. President Barack Obama will be one of those giving remarks.

(1) Jackson passed legislation for the person often known as the “mother of the civil rights movement” – Rosa Parks – to have her statue in the original House of Representatives, now known as Statuary Hall. The “establishment” in Congress wanted her to be placed in the new Visistor’s Center, but Jackson fought them every step of the way because he had a specific reason why he wanted her in Statuary Hall (see speech below for a more detailed explanation). In short, he wanted her there because he wanted a person who represented “a more perfect Union” in Statutary Hall to symbolically keep an eye on and counter the image of all the “states’ righters” who have statues there – including General Joseph Wheeler of Alabama, still with his Confederate Uniform on.

(2) Congressman Jackson is also the person who named the new Visitors Center. Underground on the east side of the Capitol is a new and beautiful Visitors Center that is a spectacular addition to the institution of the Capitol. It displays a tremendous history of the country, the development of the Capital (i.e., the city), the Capitol (i.e., the home of the House and Senate), as well as documentation of many of our most sacred documents. Everyone needs to spend a day there. As a result of legislaton he passed, Jackson gave the new Visistors Center its name – Emancipation Hall.

THE UNVEILING OF ROSA PARK’S STATUE IN STATUARY HALL

Speech Jackson Had Prepared Before He Went On Medical Leave, June 10, 2012

Statuary Hall is the old home of the House of Representatives. Clio, the female figure in back, was symbolically taking notes and recording laws as they were made. The woman in front is a symbol of freedom and liberty – even though slavery existed in her presence. The body that met here was totally racially segregated and sexist.

I. WHY ROSA PARKS IN STATUARY HALL?

On December 1, 1955 Rosa Parks stood up by sitting down on a legally segregated bus in Montgomery, Alabama. She violated a state statute and a city ordinance that was in keeping with the dominant conservative legal framework of Alabama – states’ rights, local control, laissez-faire economics and voluntarism.

Why did I insist that the Rosa Park’s statue be placed in Statuary Hall? Because I wanted her presence to represent a more holistic view of American history and I wanted her to be seen in historical context. What do I mean?
I wanted her to desegregate this room and to keep an eye on the others here who kept her legally segregated (because of her race) in the name of a conservative political philosophy called states’ rights, local control, laissez-faire economics and voluntarism with an attitude of (quote) “our Negroes are happy down here and we’ll work it out.” Persons like Jefferson Davis of Mississippi, President of the Confederacy; Alexander Hamilton Stephens of Georgia, Vice President of the Confederacy; General Joseph Wheeler of Alabama, still in his Confederate uniform; and the Great racial Compromiser, Henry Clay of Kentucky.

The Rosa Parks statue is appropriately taking the spot formerly occupied by Confederate General Robert E. Lee of Virginia, who was recently reassigned to the Crypt.

And I don’t want to forget Brigham Young of Utah, whose religion barred African Americans until 1978.

Finally, I wanted Daniel Webster and those who believed in building a more perfect Union – not a more separate and unqual states’ rights – to have some company.

II. WE MUST SEE ROSA PARKS IN HISTORICAL CONTEXT

This is what I mean by “historical context.” The House of Representatives met in this room for 50 years – between 1807 and 1857.

Under the Constitution’s direction, in this room, the international slave trade ended in 1808 – even though it was allowed to continue between the states.

In this room the Missouri Compromise of 1820 became law, which admitted Missouri as a slave state and Maine as a free state – followed by six other states admitted by 1848, three slave and three free in order to protect the peculiar institution through a balance of power in the Senate.

The House’s “gag rule” originated in this room in the mid-1830s – which barred discussion or referral to committee of all anti-slavery petitions.

The great racial debates in the Senate between 1820 and 1850 involving John Calhoun, Daniel Webster and Henry Clay, and the resulting racial compromises that kept the Union together – but only delayed the American Civil War – took place only a few steps from here and impacted this body.

In this room Whig Congressman Abraham Lincoln of Illinois served one term in the 30th Congress (1847-to-1849) and on December 22, 1847 presented his “Spot Resolutions” in opposition to the war with Mexico. Of course, in 1861 he became the 16th and first Republican President of the United States, kept the Union together through a bloody war that cost 620,000 American lives, issued the Emancipation Proclamation in 1863, overcame the limitations of the 10th Amendment and steered the 13th Amendment ending slavery though Congress in 1865 and shortly thereafter was assassinated for advocating the “right to vote” for Negroes.

Guns and knives were brought into this chamber, fist fights broke out, and “duels to the death” over slavery were proposed in this room.

The 1854 Kansas-Nebraska Act, featuring the organizing principle of Illinois Senator Stephen A. Douglas – “popular sovereignty” or “states’ rights” – was passed in this chamber, triggering the founding of the Republican Party as an anti-slavery party in Ripon, Wisconsin in 1854, followed by “Bleeding Kansas,” John Brown’s raid at Harper’s Ferry in 1859, Lincoln’s election in November, 1860 and the start of the American Civil War on April 12, 1861.

And it was on May 22, 1856, that South Carolina’s Representative Preston Brooks left this chamber and nearly beat to death with a cane Abolitionist Senator Charles Sumner of Massachusetts, accusing him of insulting his uncle, South Carolina Senator Andrew P. Butler, for analogizing his embrace of a prostitute (i.e., slavery) as his mistress.
Statuary Hall is also where the Massachusetts militia was quartered during the Civil War.

III. ROSA PARKS AND THE LAW

It made its way to the Supreme Court challenging Alabama’s state statutes and Montgomery’s city ordinances requiring segregation on Montgomery’s buses. On June 5, 1956 a three-judge U.S. District Court ruled 2-to-1 that Alabama’s segregated buses were unconstitutional based on the 1954 Br
own decision.

An appeal by Alabama and Montgomery was rejected by the Supreme Court on December 17 and on December 20, 1956 the decision officially arrived in Montgomery. Dr. King and the community voted to end the 381-day bus boycott and the next morning Dr. King and African Americans in Montgomery – for the first time – rode Montgomery’s buses on a desegregated basis.

It reminds me of Supreme Court Justice Thurgood Marshall’s speech at a bicentennial celebration of the Constitution in 1987. “What is striking” Justice Marshall said, “is the role legal principles have played throughout America’s history in determining the condition of Negroes. They were enslaved by law, emancipated by law, disenfranchised and segregated by law; and, finally, they have begun to win equality by law. Along the way, new constitutional principles have emerged to meet the challenges of a changing society. The progress has been dramatic, and it will continue.”

Rosa Parks was carrying a lot of historic weight on her shoulders emanating from this room. That’s why she deserves to be here in Statuary Hall.

Rosa Parks challenged Alabama and the 10th Amendment (states’ rights), Montgomery (local control), laissez-faire economics (a deregulated environment where transactions between private parties were free from government over-site) and volunteerism (just give us a little time, don’t interfere and we’ll work it out), and she took her case all the way to the Supreme Court – and prevailed – in order to form a more perfect Union!

Or, to put it another way paraphrasing a past popular song, Rosa Parks fought the law (state and local law),  and the law (federal law) won. by affirming everyone’s citizenship and providing equal protection under the law for all Americans.
Rosa Parks – rest in peace.

Rosa Parks statue – stand here among the mighty with dignity.