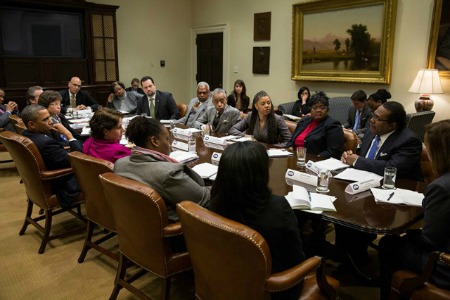 On Thursday, President Barack Obama met with African-American leaders across various organizations to discuss and address growing concerns regarding the economic crisis that continues to grip the country. With the release of “The President’s Plan for a Strong Middle Class and a Strong America” last week, Obama’s presence at the meeting was to hammer home some fine points of the plan as it relates to Black Americans.

The gathering comes on the heels of another related meeting White House officials had with media last week, after the President’ State Of The Union address. NewsOne was in attendance that day and reported on the findings of the meeting. However, the focus for yesterday’s talks were centrally focused on the inequalities that are shaking apart the African-American community.

President Obama restated his commitment to increasing employment opportunities for those affected strongest by the economic downturn. This includes an increase in job training programs and a call to encourage businesses and companies to invest resources in the neighborhoods they serve. Education was also at the forefront as Obama raised the idea of making universal pre-K available for every child in order to improve the future success of students.
In a statement, Rev. Sharpton commented on his meeting with the President, saying the group focused on voting rights:

“I and other leaders had a very significant discussion with the President about concerns in the African-American community and the civil rights community in general and most specifically about voting rights.

“Just yesterday the state of Virginia House of Delegates passed strict government photo ID requirements for voting. As states around the country engage in what we feel are voter suppression methods, next week the Supreme Court will hear oral arguments about Section 5 of the Voting Rights act.”

“On unemployment, which is also disproportionately impacting our communities, we must deal with job creation and job programs, educational inequality, the problems of unfairness in the criminal justice system, and the problem of gun violence.

“Many of our communities go unnoticed but suffer a disproportionate number of casualties from gun violence. The President engaged us in a spirited conversation and seemed to be listening intently.”

With the sequester looming and scheduled to take place next Friday (March 1), President Obama called on the leaders to continue speaking to the realities of the deficit reduction. If the automatic cuts do go forward as feared, thousands of jobs and programs will feel the brunt of the shakeup. More importantly, services that help the less fortunate will be cut and the effects could be detrimental.

President Obama thanked the leaders for their continued commitment to the improvement of the country’s economy and their willingness to urge Congress to move swiftly in passing the policies that can get the country moving in a positive direction.