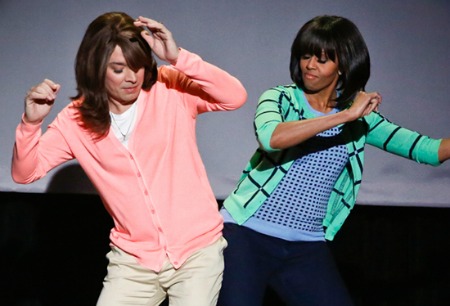 The first lady and the comedian appeared in a skit called “The Evolution of Mom Dancing.” In it, Fallon, disguised as a pink and green-clad suburban “mom” — was joined by Mrs. Obama in showing off dances like the “Go Shopping, Get Groceries,” the “Just the Hands Part of ‘Single Ladies,’” the “Where’s Your Father (Get Him Back Here!),” the “Driving the Station Wagon” and the “Out of Sync Electric Slide.”

But it was the first lady who wound up getting the better of Fallon’s hip swinging suburbanite when she launched into what has become one of her signature moves: “The Dougie.”

The skit was part of an appearance on the show in which the first lady also challenged Fallon to a series of physical exercises, all designed to demonstrate the importance of keeping fit.

The two even tweeted their pre-workout rivalry before the show, which was taped Friday afternoon in New York.