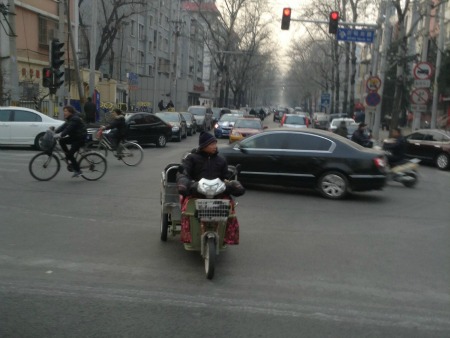 BEIJING (NNPA) – When Julia Wilson visited China for the first time in 2002, no one had to tell the former Los Angeles television reporter why China was known as “the Kingdom of Bikes.”

Wilson, who is CEO of Washington, D.C.-based Wilson Global Communications, said: “It was so different, especially with the bicycles. Imagine rush hour traffic – with bicycles. All of the bicycles would stop at the traffic light. It was a thing to behold. The cars were to the side because there were not many cars. Today, it’s the reverse and the cars have replaced the bikes.”

China is the world’s largest market for automobiles, making it “the Kingdom of Bikes” and “the Kingdom of Cars.” General Motors, despite entering the market after Volkswagen, is the best-selling foreign automaker.

Bicycles coexisting with automobiles, especially in urban areas, is just one aspect of life in China.

Lynne Coleman, who spent nine years as an administrator at international schools that cater to American expatriates in Beijing and Shanghai, gets excited when she reflects on her time in China.

“It is a place where I can dine on delicate fusion cuisine prepared by world-class French and American chefs, or choose a live snake for dinner and watch it killed, bloodied and cooked in front of me,” she said.

Her husband, Craig Trygstad, prefers reflecting on China’s rich history rather than its rich – and sometimes exotic – food.

“What I enjoyed most was getting to know the people,” said the former teacher. “And since I love history, it was great to be able to walk through so many of the sites I have read about –the Great Wall of China, the Terracotta Soldiers, the harbor in Shanghai where Chiang Kai-shek’s army escaped to Taiwan as Mao’s forces chased them down.”
Carl Murphy, a 31-year-old Black businessman from Atlanta, speaks fluent Mandarin, is co-owner of a Shanghai nightclub, and operates a business with a close friend from Atlanta that assists U.S. entrepreneurs looking to do business in China.

“In major cities, you can eat foreign food every day, if you wish, live in the same areas as other foreigners, go to all English-speaking venues, and watch international news,” he said. “There are some foreigners I know who have been in China for almost 10 years and don’t speak the local language. Yet, many of their children are fluent. Some of them prefer to live in local housing, go to local Chinese restaurants every day and even befriend and date or marry Shanghai residents. It’s definitely a personal decision.”

Miles away from Shanghai, rural communities reflect another world.

“In 2006, it took about 40 minutes traveling by car beyond the Mu Tian Yu Great Wall visiting site west of Beijing to find yourself back a hundred years to a time and place where crops are harvested by hand and milled with a donkey,” said Lynne Coleman, a native of Lewiston, Idaho. “People have no indoor plumbing, the whole family sleeps on one kong (a concrete, horizontal chimney that provides some heat in the very cold winters) and three-room houses are heated with wood fires fueled by sticks gathered by hand and carried on the backs of residents.”

Many Chinese are moving away from such rural trappings to relocate to the city, where the per capita disposable income is more than four times that of rural communities.

“There are so many construction sites in Beijing, Shanghai and all over than when I was here before,” said Julia Wilson, whose company organizes tours to China, Brazil and other countries to help improve the image of African Americans abroad. “They are building so many apartments because you have so many rural people moving to the city for jobs. They have no place for these people to live.”

To slow China’s burgeoning population, the Communist Party of China (CPC) has adopted a one-child policy that restricts the right of parents to determine how many children they can have. In urban areas, couples are permitted to have one child and can apply to have a second if each parent was an only child. The policy is more relaxed in rural areas where couples can have a second child if the first one was a girl. Each person in a couple who violates China’s population control policy must pay a “social compensation fee,” which can be as high as 10 times a person’s annual income.

Some provinces have regulations that require women who violate the family-planning policy to abort their pregnancies. The other provinces insist on unspecified “remedial measures,” which in most cases leads to an abortion. Even with its strict population control, China is expected to grow to 1.4 billion people by 2020.

Government officials note with pride that in an effort to integrate ethnic minorities into Chinese society, they have what amounts to an affirmative action program. But the 2011 State Department annual report on human rights notes, “Most minority groups resided in areas they traditionally inhabited. Government policy calls for members of recognized minorities to receive preferential treatment in birth planning, university admissions, access to loans, and employment. However, the substance and implementation of ethnic minority policies remained poor, and discrimination against minorities remained widespread.”

Although a communist country, laws on the books in China provide a remarkable array of individual and group freedoms, including freedom of speech, freedom of association, operation of a free press and the right to a public trial before an independent judiciary.

In practice, however, those “freedoms” quickly disappear when the state makes a broad claim of “subversion of state power” or contend an action goes against “the interests of the state,” according to the U.S. State Department.

By definition, communist and democratic systems of government are fundamentally different. And there is also sharp difference in how citizens in China and the U.S. view theirrespective governments.

In addition to a reverence for the central government, Chinese have an unshakable respect for the family, a carefully structured unit where children learn their role and are taught respect for authority and where the father’s word is final and not subject to challenge.

“China is where family-level decisions and sacrifices are made, based on the good of the family and not what is best for the individual,” explained Lynne Coleman, the Americ
an educator who spent nearly a decade in China. “The worst crime for ordinary people is bringing shame on the family.”

Children are taught at an early age that they must care for their parents when they grow old. Government officials invariably dye their hair black because of the widespread belief that people with white hair should be cared for in the sunset of their life and not do heavy work.

The government does the heavy and intrusive work of closely monitoring its citizens..

A.J. Liebling, the caustic press critic, is famous for saying, “Freedom of the press is guaranteed only to those who own one.”In China, all print and broadcast media is state-owned. Consequently, the State Department says, Chinese media is used “to propagate government views and [Communist Party] ideology.”

“The philosophical thinking is different between Chinese and people in the U.S.,” he said. “Chinese don’t believe in absolute press freedom. All media has to be responsible. We have our boss and we listen to our boss. That doesn’t mean that the boss intervenes in the daily operation of the newspaper.”

The “boss”boldly intervened when the Southern Weekly, a newspaper in Guangzhou, the capital of Guangdong province, ran a New Year’s editorial calling for greater respect for constitutional rights in China, which was quickly rewritten by Tuo Zhen, the Communist Party’s top propaganda official in the province. The replacement editorial in the newspaper, also known as Southern Weekend, praised the party’s policies. The censorship touched off a newsroom strike and rare public protests in China.

When the New York Times ran a story last October disclosing that Prime Minister Wen Jiabao’s family had amassed $2.7 billion, Internet access to the story in China was quickly blocked. Social media, including Facebook and Twitter, are blocked in China for various reasons, including the ability to be used as anti-government organizing tools.

Despite media censorship and ironclad government control, some foreigners sending email to China have been able to slip content critical of the government past the legions of censors. And despite a reluctance to speak out publicly, citizens often criticize their government in small, private settings.

Chinese are quick to note some positive aspects of their government.

“This country reserves seats for certain minorities at all levels of government,” said Alexander Tzang, former deputy president of The Hong Kong Polytechnic University and special adviser to the China-United States Exchange Foundation. “We have reserved seats for non-Communists, for females, for minorities and so on. They are guaranteed seats. They don’t come by elections. That’s not really democracy. But if you look at it from another angle, is it better to have minority voices being heard more vividly? It is much more equitable representation.”

Many are hoping that Xi Jimping, the new general secretary of the CPC Central Committee, will keep his pledge to promote a more open society, including following China’s 1982 Constitution.

Xi, who was elevated several months ago along with six new members of the Standing Committee of the Central Committee Political Bureau, said: “The CPC should be able to put up with sharp criticism, correct mistakes if it has committed them and avoid them if it has not.”

Until that becomes a reality in China, as long as citizens and foreigners stay away from the sensitive topics of Taiwan, Tibet, the Falun Gong religious sect and criticism of the Communist Party of China, they can live what is considered a normal life in China.

“What I enjoy most about China is the open-mindedness of people,” said Carl Murphy, the Atlanta native now living in Shanghai. “The ironic thing is Chinese people are portrayed as a bit robotic and not being free-thinkers. The funny thing is that after living here, I can say the same thing about Americans, which was displayed worldwide for everyone to see during the presidential election.”

Craig Trygstad said, “In cities like Shanghai, Guangzhou, Tianjin or Chongqing, there is an energy and work ethic that is hard to miss. I sometimes felt like that energy – which you see in small furniture factories, in tailor shops and felt in bustling markets – is how you define capitalism. And that is when I would forget that we were in a Communist country.”

(This 4-part series is the outgrowth of a week-long African American Media Leaders Mission to China sponsored by the China-United States Exchange Foundation, a non-profit organization whose goal is to foster a better understanding between the people of China and the United States. Neither the foundation nor government officials in China had any imput in these stories or saw them prior to publication. The 7-member U.S. media delegation was led by Cloves Campbell, Jr., publisher of the Arizona Informant and chairman of the National Newspaper Publishers Association. The trip included visits to Beijing, Xi’an and Shanghai.)