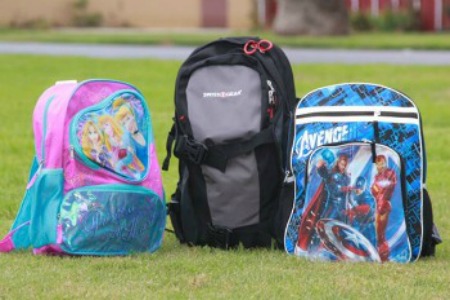 Would you buy your kid a bulletproof backpack?

Apparently a whole lot of parents are answering that question with a hearty “Yes!” Since the ugly Newtown massacre in December, companies that manufacture bulletproof backpacks are seeing a huge jump in sales.

The vice president of one of the companies, Bullet Blocker, told the Washington Post that after Newtown, they went from selling 15 to 20 backpacks a week to selling 50 to 100 a day.

An Arizona-based company, Amendment II, says sales of its bulletproof backpacks— Avengers for boys, Disney princesses for girls — have risen more than 500 percent since Newtown.

What’s going on here is a ramping up of the tyranny of fear that retailers have been using for years to sell their wares to parents. From car tires to alarm systems, car seats to organic baby food, manufacturers understand the extreme paranoia of the parent brain: protect our child at all costs. And almost always, the parent brain is ruled by emotion rather than rationality. With our (sometimes) irrational fears invading every recess of the parent brain, we will plop down every last dime in our pockets to make sure our children are protected.

Cause let’s be clear: the bulletproof backpack is about as irrational as a fearful parent can get.

So if you were really reacting to the odds, the more rational decision would be to never let your child walk outside. But there’s no retailer trying to sell a product that will protect your child in the street, so no one has yet to use the tyranny of fear to make parents afraid of letting their children walk outside. Maybe that product is on its way to market, but it hasn’t gotten here yet.

President Franklin Roosevelt once told America that “the only thing we have to fear is fear itself.” I think this thinking also applies to parenting. We can’t let this tyranny paralyze us, make us keep our kids locked in the basement, push us into buying something as crazy as bulletproof backpacks. Can you imagine the fear you would instill in your child’s heart with the instructions that go along with such a backpack?

“Okay Suzy, if a crazy man starts shooting at you, hold the backpack in front of you like this…”

My 10-year-old freaks out when she hears thunder. Instruction on using her backpack to stop a bullet would render her apoplectic every time she stepped into the school building.

“Arm the teachers, in the meantime, bulletproof the kids,” Black Dragon said on its Facebook page.

It’s tempting to believe we can bulletproof our kids, but we can’t.

But we can’t let our parental fears do more harm to them than the crazed gunman we think is lurking around every corner.

Editor’s Note: Author Nick Chiles, a regular contributor to LivingWELL magazine, blogs on mybrownbaby.com. He is a Pulitzer Prize-winning journalist and the author of seven books, including the New York Times bestselling tome The Blueprint: A Plan for Living Above Life’s Storms, co-written with gospel legend Kirk Franklin. His book on Fatherhood, co-authored with Atlanta Hawks is on our must read list.