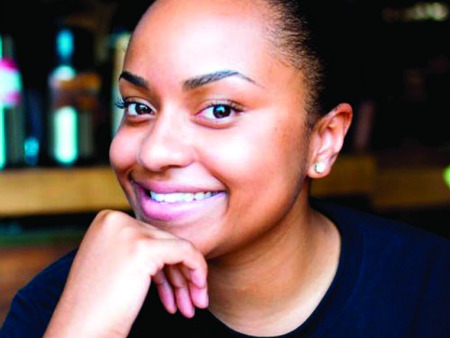 Nailah Ellis (pronounced ni-E-luh) recalls as a youngster the reaction people had after tasting the homemade tea her father prepared during holidays or at family gatherings. Their animated glee was a dead giveaway that, indeed, the beverage was truly something special.

It began with Ellis’ great-grandfather, who was a master chef on Marcus Garvey’s Black Star Line shipping fleet. He developed the recipe for the tea and eventually passed it down to her father with the mandate that the recipe was to be sold and not told. In other words, take the recipe to market. Ellis’s father never got around to doing so, although he did share the formula with her. A series of unfortunate decisions landed him in prison, so Nailah, who always longed to be an entrepreneur, decided the family tea would be her entrée into establishing her own business.

The 25-year-old Detroit native started her endeavor, Ellis Island Tea, four years ago by brewing the tea in her kitchen — a process that took her hundreds of tries to perfect. Ellis’s venture hasn’t always been easy, but she points to the discussions with her mother as helping her discover the infinite possibilities of life in general, and her business in particular.

“My mother always told me to do whatever it takes to be successful,” Ellis said. “She told me to create lemonade out of lemons, to never take no for an answer and to create my own reality.”

It was recounting those pearls of wisdom from her mother that aided Ellis in molding her entrepreneurial mindset, particularly in light of what others initially thought about Ellis Island Tea. “People laughed at me,” she said. “They said, ‘you think you’re going to come out here and start a beverage company and compete with Pepsi and Coke?’ But I persevered, in spite of being told no at almost every turn when I was trying to get into stores. I used what my mother taught me and figured it out and found ways to get that ‘yes.’”

Part of Ellis figuring it out did, in fact, involve doing whatever it took to be successful, much like her mother insisted. Not having a particular roadmap to follow to attain entrepreneurial success, she simply used her gut instincts. When Whole Foods broke ground on its first store in Detroit, Nailah Ellis was there.

She met with and presented to several Whole Foods executives and convinced them to further demonstrate their desire to invest in the rebirth of Detroit by ensuring locally-made products are on their shelves. They agreed, and now Ellis Island Tea will soon be available in two local Whole Foods locations.

Ellis is even trying to penetrate into Whole Foods’ regional account, which could place Ellis Island Tea in 147 Whole Foods stores throughout the Midwest.

To accommodate her growing venture, Ellis will soon move her production operation into a 3,000 square foot warehouse in the city. “There are no beverage production facilities in Detroit, so that’s why it’s important that I bring it into the city,” she said.

You can find Ellis Island Tea in all Westborn Market locations, Soupdive in Southfield, Honeybee Market in Mexican Village, the Hudson Café downtown and the Mobil service station on Woodward and Forest.