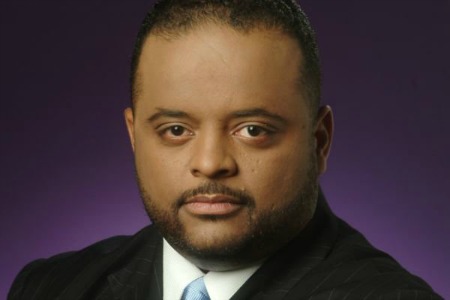 Roland S. Martin, a nationally award-winning and multifaceted journalist, will be the keynote speaker when Ford-Employees African-Ancestry Network (FANN) hosts its 32nd Annual Black History Month celebration on Friday, Feb. 22, 2013. The event, “An Evening with Roland S. Martin,” will be held at the Adoba Hotel Dearborn (formerly the Hyatt Regency), 600 Town Center Drive in Dearborn. A VIP reception will be held from 4:45 p.m. to 5:45 p.m. The program begins at 6:00 p.m.

For more than seven years, Martin has been considered as one of the nation’s most influential journalists, known for his fresh perspective for the 21st Century. He is a commentator for TV One Cable Network and host and managing editor of “Washington Watch with Roland Martin.” He is also a CNN analyst and senior analyst for the Tom Joyner Morning Show. Over the years, Martin has received such honors as the NAACP Image Award and CNN’s Peabody Award. Ebony magazine has listed him numerous times as “One of the 150 Most Influential African-Americans in the United States.” Martin is the former executive editor and general manager of the historic Chicago Defender, one of America’s most storied African-American newspapers. He is also a former radio host for WVON-AM in Chicago.

“We are extremely honored to have Roland S. Martin as our keynote speaker for our Black History Month event, says Gwen Moore, chairperson for FAAN’s Black History Month Program, whose corporate title at Ford is IT governess and special projects manager. “It means a lot because it’s very important that as we look to celebrate Black History Month with our employees, dealers, suppliers, and the community, that we bring in relevant people that have had a significant impact on shaping the African-American experience. Certainly, Roland S. Martin is a person who has done that.”

In addition to FAAN welcoming Martin, the organization will present FAAN’s Heritage Award to Dr. Violet T. Lewis, founder of the historic Lewis College of Business. FAAN will also present its Community Service Award to Dr. Iris Taylor, president and CEO of Detroit Receiving Hospital, as well as to Armond R. Harris, Terrence J.L. Thompson, and Shawn T. Blanchard, all of whom operate Run This Town, a Detroit-based fitness organization.

Established in 1983, FAAN is Ford Motor Company’s first employee resource group. The group’s mission is to promote an environment within Ford Motor Company which recognizes the value of diversity and attracts, develops and retains African-Ancestry employees to the fulfillment of company objectives. In addition, FAAN continuously reaches out to sponsor and facilitate community initiatives.

“I encourage everyone to come out and celebrate this Black History Month event with Ford-Employees African-Ancestry Network, says Moore. “It is going to be a fabulous affair for all.”