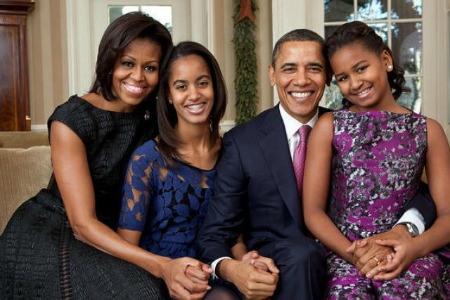 I admit that I got a little thrill when I read about the lengths the Obama’s went to make sure there were no pictures sent out into the world showing their daughters in bathing suits.

As the father of two daughters roughly the same age as Malia and Sasha, I can attest to that numbing feeling of shock I got when I woke up one day and realized that my 13-year-old daughter, who in most ways still very much has the mindset of a young adolescent, is now viewed by the rest of the world—and the males in that world—as a woman.

Every day, as I see her walking out my front door with the earrings and the cute little outfits and the bounce in her dreads, this realization slams me all over again, making me want to go invest in a store full of overalls to shelter her from prying male eyes.

The Obama’s were vacationing in Hawaii and happened to be on the beach at the same time as Jessica Simpson, who is a paparazzi obsession. According to Celebuzz.com, as one of the creepy photogs aimed his camera lens in Jessica’s direction, he realized that he was viewing the Obama girls, in bikinis, without their parents. So he snapped away—until he found himself confronted with Secret Service agents. But they didn’t snatch his camera away and smash it up like Sonny Corleone in “The Godfather.” No, the next steps were really classy, just like the Obama’s. The agents simply checked the photographer’s identification and went on their way. But when the photographer sent out pictures of the Obama girls through his agency’s wire, he got a letter on White House letterhead requesting that the images not be released—and pointing out that other media had been respecting these requests.

Oh, what I could do with an entire government agency of armed federal officers tasked with the job of keeping prying eyes—and curious dudes—away from my girls! And a press office intent on making sure no one will ever run pictures of them or write anything remotely negative about them.

Obama acknowledged as much on one of the late night talk shows last year. When asked whether he was worried about his girls becoming young ladies, the president said he has a whole force of guys with guns to make sure boys stay away from them. I think he was only half joking. But I felt him.

The fact is that parents need every bit of help we can get to keep our girls from growing up too early. And we certainly don’t get any assistance from pop culture, which seems dedicated to inappropriately sexualizing girls too fast.

Everywhere you turn, you’re bombarded with these uncomfortable images, from “Toddlers and Tiaras,” which covers the tiny faces of the toddlers with excessive makeup and their bodies in ridiculously racy clothes—this is the show that gave the world Honey Boo Boo—to the scary momager moves of Kris Jenner, the genius behind the creation of America’s sex kitten, Kim Kardashian. Mrs. Jenner now has directed her attention to turning her two youngest daughters, Kendall, 17, and Kylie, 15, into the next generation of Kardashian sex goddesses—and in the process sending out the clear message to every young girl in America that sexualizing herself is the quickest path to riches.

As the perfect counterpoint, we offer this lovely anecdote told by Muhammad Ali’s beautiful daughter Hana, who co-authored the 2004 book, “More Than a Hero: Muhammad Ali’s Life Lessons Presented Through His Daughter’s Eyes”:

“When we finally arrived, the chauffeur escorted my younger sister, Laila, and me up to my father’s suite. As usual, he was hiding behind the door waiting to scare us. We exchanged many hugs and kisses as we could possibly give in one day. My father took a good look at us. Then he sat me down on his lap and said something that I will never forget.

Way down in the mine, covered over with layers and layers of rock. You’ve got to work hard to get to them.” He looked at me with serious eyes. “Your body is sacred. You’re far more precious than diamonds and pearls, and you should be covered, too.”

This is a sentiment all of us—parents and daughters—should all hold close to our hearts at all times: Our girls are more precious than diamonds and pearls.

Editor’s Note: Author Nick Chiles is a regular contributor to mybrownbaby.com and a Pulitzer Prize-winning journalist, is the author of eight books, including the New York Times bestselling tome The Blueprint: A Plan for Living Above Life’s Storms, co-written with gospel legend Kirk Franklin.

Chiles recent efforts to call attention to the plight of the poor and its impact on children raised attention and awareness of many, including former House Speaker Nancy Pelosi. We’re proud of your efforts man!