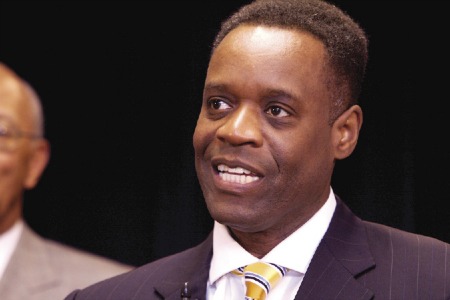 In his State of the City address last week, Detroit Mayor Dave Bing cited various challenges and achievements during his term in office.

Emmett Moten, Jr. CEO of the Moten Group, who is a co-owner of the Doubletree Hotel downtown and a former development advisor in the Coleman Young adminstration, said he was pleased that for the first time in a long time he heard a compilation of what the mayor has accomplished.

“You know the jobs GM would have moved to Warren if it hadn’t been for the mayor stepping up,” Moten said.

In his speech, Bing said his administration kept GM in Detroit when the automaker was considering moving out of the Renaissance Center.

“More than 5,000 GM employees remain a vital part of downtown,” the mayor said.

Moten also credited Bing with the establishment of a public lighting authority, which is in the hands of city residents.

“They haven’t been able to do that in years,” he said. “You know lights have been have been going off, people stealing transformers, stealing copper.”

According to the mayor, the proposal to create a public lighting authority in the city — one backed by both state legislators and the city council— could see much as $160 million invested in infrastructure upgrades; and could see lights being turned on this year.

Moten also said the creation of a regional transportation authority is a “huge” accomplishment.” He said that during the 10 years he worked for Mayor Young, the Young administration wasn’t able to get such an authority established.

In his speech, the mayor announced the appointment of Lisa Franklin to the Regional Transportation Authority Board.

He also said Ray LaHood, the outgoing secretary of transportation, “recognized the extraordinary efforts behind this transformation and presented the city with $31 million to jump start the rail system and the Regional Transportation Authority.”

Moten said that just like the Metro system in Washington, D.C., a single line will branch off into others.

The mayor also addressed the city’s financial situation, including the fact that state revenue sharing to Detroit has been consistently reduced since 2001.

“Last year, we received $93 million less than in 2009, when I took office,” Bing said, adding that over the past 11 years, the total amount of cutbacks in state revenue sharing to Detroit comes to more than $700 million.

Moten said he didn’t realize that the city has had such severe cutbacks.

He also noted the fact that the city hasn’t had any payless paydays is “huge.”

Moten said he was impressed by the $1.5 million federal grant, which allowed the Detroit Youth Violence Prevention Initiative to launch Operation Ceasefire. The mayor described it as a project that connects law enforcement and social workers with young offenders to direct them away from crime.

This program, Moten pointed out, seems to be working in other parts of the country.

He acknowledged that the State of the City address is a political speech, but said it also sets the tone.

“The mayor deserves great credit for a compelling presentation that was well done, and that was a good review of many of his accomplishments during his time as mayor,” said Detroit Regional Chamber President Sandy Baruah.

He added that it was probably also an awkward time for the mayor, given the situation with the state and the possibility of an emergency manager coming in.

“He was constrained in what he was able to say,” Baruah said. “So those who may think that he didn’t say enough, it was probably an issue of unfortunate timing.”

Baruah understands why the mayor wasn’t able to be as detail oriented regarding the city’s financial situation as many people were expecting.

He also noted that we should celebrate and be proud of the work that has been done. He said there are significant challenges in the city, but Mayor Bing and his team accomplished a great deal.

For his part, Moten remains hopeful that Mayor Bing and Gov. Snyder will forge a relationship similar to that between Mayor Young and Gov. Milliken. He said Young and Milliken solved problems by talking and working together.