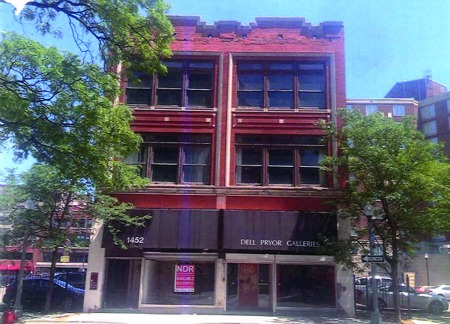 The Michigan Chronicle and its parent company, Real Times Media, are expanding operations and moving into a 18,000 sq. ft. building located at 1452 Randolph in Harmonie Park. The building will house the new world headquarters for Real Times Media, which currently has offices in six states. Vacated by Dell Pryor Gallery five years ago, the property was recently purchased by Paradise Valley Real Estate Holdings, a group of African American investors who are committed to the revitalization of Detroit.

A historically designated site, the building will be returned to its original splendor. Once renovations are complete, the new address will be home to an in-house studio which will allow the company to continue its expansion into the production of original video content for its Web properties as well as for its sister publications under the Real Times Media umbrella.

Real Times Media is aggressively expanding into the digital space and creating a greater online presence. With new brands like PraiseConnect.com and The Digital Daily, it will need the extra space to build an in-house studio with which to produce video content and to house a growing staff.

“The move to Paradise Valley marks a new chapter for the Michigan Chronicle,” said Jackson. “As we continue to evolve to fit the needs of new generations, we are expanding our focus to address the digital realities of today. Our move to Paradise Valley embodies this renewed spirit. Even today, the area harkens back to its roots as a bustling African American business and entertainment mecca and it’s exactly where our company needs to be.”

The building’s new owner, Paradise Valley Real Estate Holdings, draws its name from the area in which it is located, a historic district known as Paradise Valley which was Detroit’s bustling African American business and entertainment area from the 1930s to the 1950s.

Paradise Valley was a predominantly African American area in downtown Detroit known as a hotbed for entertainment and artistic activity with movie houses, and some of the first jazz clubs to come up in the north during late ’30s and ’40s. While it is not clear how the area came to be known as Paradise Valley, some have speculated that it drew its name form the newly introduced Asian “paradise” trees that grew throughout the area. A vibrant area, the neighborhood has been celebrated in musicals like Bea Buck’s “Paradise Valley Revisited” and “Masquerade Flashback,” and recalled in Elaine Wood’s book, “Untold tales, Unsung Heroes.”

Today’s Paradise Valley is surrounded by nearly a dozen performing arts venues and is within waking distance of the Fox Theatre, the State Theatre, the Detroit Opera House, Music Hall, the Gem & Century Club, Hockeytown, Ford Field, Comerica Park, and a number of restaurants, bars and pubs.